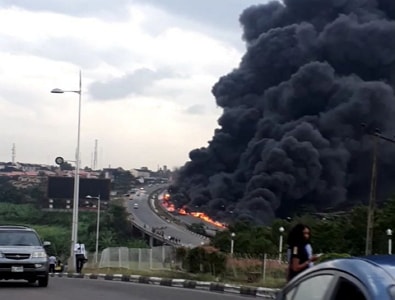 A lucky man who survived the recent fuel tanker explosion in Lagos said most of the people who were in close proximity to the tanker did not see the accident coming. The survivor, who simply gave his name as Oluyemi, said he was based in Liberia but was visiting Nigeria on holidays when he was caught in the inferno which left scores dead and 60 vehicles burnt. Oluyemi who is on admission at the Lagos State University Teaching Hospital (LASUTH), Ikeja, said:

“It was only by the special Grace of God that I survived the explosion that engulfed a wide expanse of the Otedola Bridge.”

The burns of the survivor was up to 30 per cent, which in medical parlance was not much, yet his right and left hands, face and head were badly burnt. The entire skin on Oluyemi’s face had gone black while a part of the skin on his head had peeled off. Also, his right eye was swollen; his right hand, left leg and his belly were similarly burnt and bandaged as he lay on hospital bed in LASUTH. Although, he was still restless, experiencing high thirst and pain, he was able to speak, thanking God for saving him from the inferno. He alternated frequently between staying up on his hospital bed and staying up due to the discomfort he was feeling. According to the survivor, who said he was visiting Nigeria as part of plan to begin gradual relocation from Liberia to Nigeria with his family that is in Liberia, he actually planned to purchase a plot of land on this particular visit on which he intends to build a house.

The aim was to move some of his children back to the country after completing the project. However, the bus in which he was on the fateful day when the accident occurred, was about 100 meters away from the deadly fuel tanker.

“I observed that that the fuel tanker was rolling backward, while cars and other vehicles close to it tried to maneuver, giving way when they observed that the tanker seemed to be experiencing some challenges,” he said. Oluyemi said the tanker suddenly crashed and within minutes “there was an explosion, which sent everyone close to it into confusion and panic. “It was actually face to face with death; in that confusion, I was able to run out of the bus and with the balls of fire that were spreading, I ran and ran as fast as my legs could carry me.

There was fire everywhere; my shirt was in fire but I tried to remove it even as I ran towards the area the fire had not spread to. “As I managed to run out of the place where the flames were huge, I ran towards the companies selling cars around the Otedola Bridge. Then some sympathisers who witnessed the inferno promptly rushed towards me, assisted me into a vehicle and rushed me to a private hospital from where I was referred to LASUTH,”.