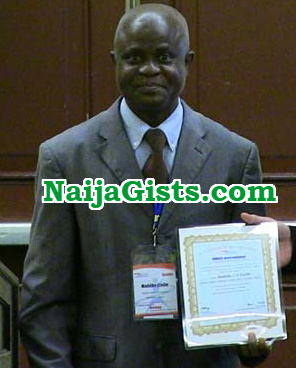 I Professor Maduike Ezeibe is using this medium to counter NCDC claim that our newly discovered cure for HIV/AIDS is fake.

The chief executive officer of the Nigerian Centre for Disease Control is not the first to rubbish our discovery. Richard Jeferes, an American research director in an email he sent to Nigerian health authorities on November 13, 2016, demanding that they investigate the claims used exactly same words.

From Jeferes statement, it appears that what they mean by controls is to have a group of 10 other HIV/AIDS patients who were not treated so that data from them (the controls) could be compared with data from the ten treated patients, to be sure the Nigerian antiretroviral medicine was responsible for the 100%cure, achieved. At this level of research (innovative), we needed to do more than the ordinary.

To ensure changes recorded in the treated patients were due to the medicine and not from other sources or causes, the two groups of data to be compared for statistical differences needed to be collected from persons of same sex, age, nutritional status, environment, tribe, occupation, season and genetic makeup who were infected same time and have been on same treatment and have same viral loads and same CD4 counts at time of treatment.

For experimental studies with animals, attempt could be made to come close to these conditions by random selection of animals into the two groups which would then be kept together, under same management and be infected same time using same viral doses and by same route.

This is not possible in clinical trials, even in animals, because even if you attempt to make everything same, there is no way to ensure they were infected same day and same hour and through same route. The situation is worse with human subjects.

So, the only unbiased controls in this type of research are for the two groups of data to come from same patients. That is why in such studies scientists who want to be innovative, collect data from same individuals (before and after treatment) so that when standard errors are added/subtracted differences between the two groups of data would be effects of the treatment.

That is probably why in our case antibodies regressed completely, one month after HIV viral loads became undetectable, similar to case of the “Misisipibaby” in whom HIV-antibodies could not be detected when level of HIV-infection was only drastically reduced(not whipped out).

This agreement of our results with that of the Misisipi baby should convince our people that our methods and results are scientific.

I hope you agree with me that if Nigeria is the first country to find cure for HIV/AIDS, our scientists should also qualify to teach Jeferes best methods to conduct this type of research. We must not copy his recommendations.