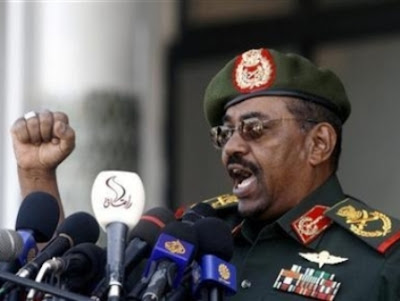 The arrest should be made, if the Nigerian government fails to stop al-Bashir from staying away at the conference, HRW said.

Nigeria is a member of the International Criminal Court which has charged Bashir with war crimes, genocide and crimes against humanity over the conflict in Sudan’s Darfur region.

Khartoum confirmed that Bashir has been invited to the Nigerian capital, which is hosting an African Union HIV/AIDS summit that opens Monday.

“I understand that there is (an) invitation,” to visit Abuja, Sudan’s Ministry of Foreign Affairs spokesman Abubakr Al-Siddiq told AFP.

“The visit will take place soon,” he added, without specifying whether Bashir planned to attend the AU summit.

Nigerian officials were not available to comment on the invitation or Bashir’s possible attendance.

Since The Hague-based court issued the indictments against Bashir in 2009, his visits, or proposed travel, to ICC member states have sparked repeated controversy.

Some court members, including Chad, Djibouti and Kenya have allowed such visits, but others like Botswana, South Africa and Uganda have ensured that Bashir stay away.

A number of states “have found a way out of this problem and Nigeria should do the same,” Keppler told AFP.

If Bashir in fact visits, Nigeria “should arrest the ICC fugitive,” she added.

Countries that have signed on to the world’s only permanent court for war crimes and crimes against humanity have a legal obligation to arrest any indicted suspect found within their territory.

A number of African leaders, including some at the African Union, have charged that the Bashir arrest warrant has hampered efforts to conduct continental diplomacy.