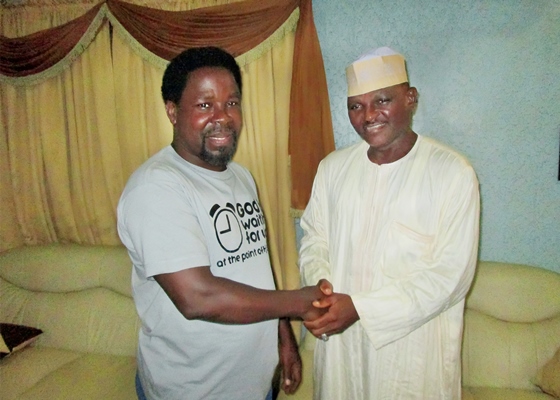 Mustapha was released from Kirikiri Prisons, Lagos on Friday 12th July after the Court of Appeal judgement acquitted and discharged him over the charge that he conspired to murder Alhaja Kudirat Abiola on 4 June, 1996. Kudirat was the wife of Chief M.K.O Abiola, the popular winner of Nigeria’s controversial 1993 presidential elections which were then annulled by Ibrahim Babangida.

Mustapha’s trial has been the subject of intense media interest across Nigeria, his release yesterday coming as a surprise to many as only last year he was condemned to death by hanging in a Lagos high-court for his alleged involvement in the killing.

From the prison, Mustapha made his way immediately to Ikotun, the Lagos suburb, where Joshua has his popular church.

Joshua, the pastor recently lauded as one of Africa’s 50 most influential figures, explained in an interview that their relationship dated to the Abacha years when he was arrested and detained for nine days over a petition sent to the Chairman of the NDLEA about his ministry.

“I got to know him many years ago when a petition was addressed to General Bamaiyi who was the then Chairman of the NDLEA. As you know, several efforts had been made by my detractors to bring me and my ministry down. One of those efforts was that petition. I was arrested and spent nine days with them for investigation and they found the whole thing to be a fabrication. From there, I was taken to Aso Rock (City of Power) to see the president. It was there that I met Mustapha.

“I was able to reveal to them who I am by telling them what was to come as a prophet. One of those things I mentioned to them and to Mustapha in particular, was what he went through, though he did not believe me then. That was why when it came to pass, I was the first person he remembered. I told him that he would spend several years in prison and would be finally released which no one else had ever told him.

“That is why you see him coming here as his first port of call. When you know your picture of tomorrow, it will impart a strength to endure your present difficulty. When you know what you are passing through now will not last long, you will endure it. This is vision; this is prophecy. This can only come by revelation. This is what the Bible means by, ‘Where there is no vision, the people perish’ (Proverbs 29:18).”

Mustapha was arrested in 1998 on the orders of the then General Abdulsalami Abubakar regime, over the killings during the Abacha era.

Coincidentally, T.B. Joshua is also reported to have personally prophesied to Chief M.K.O Abiola, Kudirat’s husband, during his presidential campaign, that he would win the election but never rule Nigeria.

About the author: Halimat Babingida is a freelance Nigerian journalist who followed Al-Mustapha from prison to T.B. Joshua’s ministry where she conducted this exclusive interview.