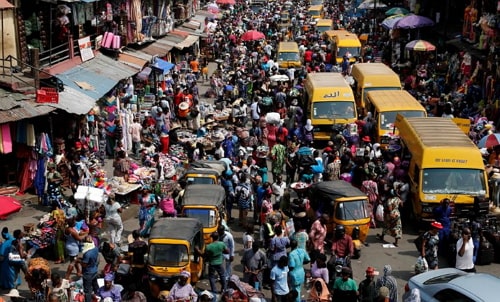 A global site demographic site Worldometers.info, puts the national population at 203,021,855 as of November 25, equivalent to 2.61% of the total world population, ranking it the highest in Africa and 7th globally.

Nigeria’s population at the present growth rate is expected to shoot to 262m by 2030, 329m by 2040. In 2050, Nigeria population will rise to 401m displacing United States and China as the third most populous country in the world.

The average population density is widely believed to be over 200 people per kilometre out of which Lagos has the highest population density of about 2607 people according to 2006 census. It is also predicted by 2050, 77 percent of Nigeria’s population will be urban, up from the current 51% residing in mega cities such as Lagos, Benin, Kano, Abuja, Port Harcourt, Ibadan, and Sokoto.

Just as corruption is a national signpost, Nigerians are also very fertile reproducing. Birth rates that was 1.9% in 1960 rose to 2.6% in 2019. Every second, the nation records four births, adding about 20,000 Nigerians to the landmass every day.

Are poor people more prolific in reproducing? This seems to be the case, when one considers that countries with the highest fertility rates in the world are all in Africa- the poorest continent. Niger, one of the poorest countries in the world leads the pack, followed by war-torn Somalia, Democratic Republic of Congo, Mali, Chad, Angola, Burundi, Uganda, and Nigeria.

Ironically, the lowest fertility rates are in developed countries such as South Korea, Spain, Japan, and United States where households have relatively higher disposable incomes. In several countries of the North, death rates have outpaced birth rates, national population are shrinking, and towns in Spain are become desolate due to low population.

The fastest shrinking population according to United Nations are in Eastern Europe-Bulgaria, Latvia, Moldova, Ukraine, Croatia, Lithuania, Romania, Serbia, Poland, Hungary. The population are expected to shrink by 15% or more by 2050.

The crux of the problem is that national, state, and local governments have not been able to match provision of social services such as health, education, water, and housing and infrastructure development such as roads, railways, and energy with increasing population growth due to inadequacy of funds, poor governance, and graft. Nigeria’s rising population has been marked with low economic growth and decaying social services and infrastructures thereby under developing Nigeria.

A school of thought, however, argues that Nigeria’s problem is not its population size as it is blessed with natural resources adequate to sustain a good standard of living if the society is egalitarian and welfarist and funds are used for the good of the greatest number. While this is true, the reality is that developed countries are working to control their population despite their enormous economic resources.

Nigeria’s first population policy was developed in 1988 during the military administration of General Ibrahim Babangida with late Professor Olikoye Ransome Kuti as Minister of Health. Its principal provisions were to ’ reduce the number of children a woman is likely to have during her lifetime, now over six, to four per woman by 2000 and and ‘reduce the present rate of population growth from about 3.3 per cent per year to 2.5 per cent by 1995 and 2.0 per cent by the year 2000″

The revised edition National Population Policy for Sustainable Development (NPP) 2004 seeks to achieve a reduction of the National population growth rate to 2 percent or lower by the year 2015 amongst others. All these lofty declarations were not respected, and targets were missed.

The way forward is for Nigeria’s three tier of governments to see its spiralling population as a national challenge and address it as such. We cannot successfully tackle and overcome poverty if we continue to proliferate like rabbits. Governments of developed countries with low fertility rates give incentives to encourage early marriage before 30 years and childbearing, likewise, we should adopt the same approach in the reverse version. There should be benefits for raising small families and penalties for raising large families. Nigeria should understudy how countries such as Russia, Hungary, Estonia, and China are achieving negative growth rates, and imbibe lessons.

Government should no longer pay a lip service to population control programmes. A national emergency should be declared on Nigeria’s rising population and all hands should be on deck to seriously stem the tide.

Agencies saddled with implementing national population polices such as the National Council on Population Management (NCPM), National Council on Population Management (NCPM), and Population Technical Working Group (PTWG) should be strengthened technically and financially to enable them effectively discharge their statutory roles. Capacity of state and local governments agencies should be built with enough financial resources and manpower to implement health, education, religious, and gender provisions in population issues.

The traditional and mass media should be harnessed in creating conducive attitudes supporting implementation of population programmes. Nigerians should realise that there is nothing fanciful being labelled as Africa’s most populous country, whereas its huge population is a liability living in poverty rather than an asset. The ‘most populous nation’ tag should cease to be a national pride. It is no good being big for nothing.

About the author: Babalobi is a doctorate researcher, Department of Health, University of Bath, UK.

Continue Reading
You may also like...
Related Topics:nigeria, popular, statistics

Staying A Virgin Until Marriage Makes You Phenomenal!
There Is A World Outside This World