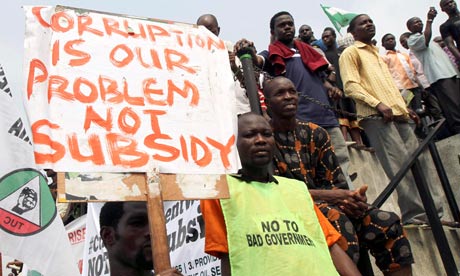 Transparency International has stated that corruption is undermining development in sub-Saharan Africa with citizens of Sierra Leone, Nigeria, Liberia and Ghana witnessing the highest levels of corruption.
It said this in a report published on Tuesday in Johannesburg that investigation has revealed that an estimated 75 million people gave bribe last year.

The report said that Word Bank data showed that Sub-Saharan Africa has a total population of 973 million, and more than 22 per cent of Africans who came into contact with public service in the past 12 months paid a bribe.

It said that interview with 43,143 people showed that police and courts had the highest corruption rates.
The organization said that police were often paid to “ignore any crime, however horrific and devastating”.

It gave the example of nine-year-old girl in Zimbabwe who was raped, but the rapist who infected her with HIV was released after paying a bribe.

“While some people pay bribes to escape punishment for crimes, others are “forced to pay to get access to the basic services that they desperately need.
“Nearly 60 per cent of those interviewed said corruption had increased over the past year.

“That was particularly the case in South Africa, where 83 per cent reported an increase in graft,” it said.
It said that those interviewed in Botswana, Burkina Faso, Senegal and Lesotho reported low levels of corruption.