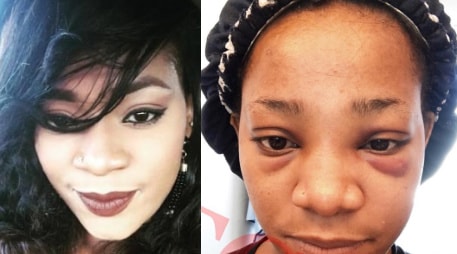 The former SoundCity presenter made the announcement on her Instagram page on days ago sharing gory photos of her battered face and blood-splattered outfit.

“Things sometimes are not always what they appear to be. For Chima and his people spreading fake stories, please move on, I have moved on with my life already.

“I choose not to talk about my personal life; that chapter of my life has been closed the day I walked out with my children months ago and it remains closed forever. My kids and I are in a happy place, and that is all that counts. I will appreciate if all of you can please respect that as well. We have little kids involved and we are focused on raising them right. Thank you all for your Love, concern and understanding, I appreciate. Sorry had to take down the first post, couldn’t stand looking at my blood,” she wrote.

Juliet met her U.S.-based husband on September 2011, and within a week, they were engaged. They had their introduction September 29 and were married traditionally by October 4 of the same year. A white wedding was scheduled to take place in January in the U.S. but it never held.

A few months later, Juliet changed her FB status from married to single. After months of keeping mum about what really happened, Juliet granted an interview revealing that her marriage ended a few months after it was contracted.

In 2014 the couple decided to give their marriage a second shot with Juliet moving to the U.S. to join her husband. The couple welcomed their first child, a son, in 2015 and in 2017; they welcomed the second child, a daughter at a hospital in the U.S.