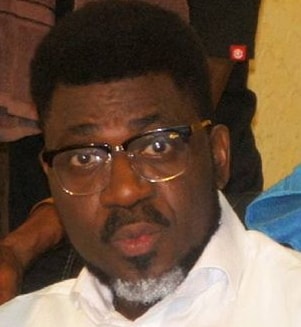 How would you define fatherhood?

I met her the way every other person meets their spouses. I was with a friend when I saw her, she was far off and because she is light-skinned, I could spot her and I kept staring at her. When she noticed I was looking at her, she was also looking my way. I later went to meet her and that was how we started.

When did you have your first child?

How old were you when you had him?

I won’t disclose my age to you. If I tell you the age I had my first child, it would be easy for you to guess my age. All I would say is I am in my early 50s; so, calculate it yourself.

Do you think you started having children late?

Yes, I would say I started late. I was not settled and did not understand woman as of then. I was scared of being committed to a relationship. Whenever my girlfriends talked about marriage in those days, I would run away; that was usually the end of such relationship. I was scared of settling down and my mother got angry with me when I refused to settle down. I couldn’t explain my fears to her then before I eventually started a family.

What were your fears?

I was scared that I would be caged and all I would be hearing in the house was ‘good morning sir’. I found it scary. I come from a very beautiful and peaceful family which I ought to emulate but I did not know the reason for my fears.

Were you there when your wife was delivered of your first child?

No. I was in Nigeria while she was in England.

Did you get emotional when you carried your baby?

I felt good and happy but I am not an emotional person. I am not just naturally emotional. I just carry them and play with them. It took a while before I bonded with my children and began to express my emotions which I should have done earlier. It’s not like I had issues with the baby. The problem was just with me.

Did you help with the house chores?

No, I am often not usually needed in that aspect. I am very lucky with that. The women I have been involved with are often very strong. My wife would have done most of the house chores and even when I offered to help out, she wouldn’t just allow me. Women are stronger than men. She would have done everything and I only went out to buy things for the family for all to be happy.

Do you believe that men should go out to work while women should stay in the house?

I don’t believe in that. Men should work and women should also work and it should be properly sorted out in a way that it won’t affect the children. Women are very intelligent; let us forget western education. A woman should bring something to the table but the man should not forget that whatever the woman brings is an addition to the family. Women often carry the responsibility of the home and they support in whatever way they can. They play a good role in supporting the home. At times, they don’t even let you know when they are performing those responsibilities.

I have two boys.

Do you wish you had a girl?

Yes, I still want a girl. I want to carry the girl. The love I had been unable to express to the boys, I want to shower her with all the emotions. I will name her after my mother and sing for her; dance for her and all that. My mother gave me some songs before she died and I want to sing them for my girl child.

How do your discipline your children?

I correct before I take any hard measure which I often do not have to take. It is when they don’t listen to me that I now smack. I hardly smack them. I talk to them and lead by example. I let them know that I was very tough while I was much younger. I tell them stories why they should not go astray. I also do not shout on them because whenever I do, they often shiver and I don’t want that.

Some believe that being gentle on male children can make them stubborn. How would you react to that?

That is true, but like I said, I was tough as a child having grown up on Lagos Island. I went through a lot. In fact, I didn’t know I could attain this feat in life. I don’t know where those we grew up together are at the moment. Thankfully, when I was 11 years, my elder sister took me from my parents’ place to hers and retrained me for me to become what I am. I inspire my children with my story. Male children can be taught. It is not about beating, it is by showing example. One shouldn’t get tired of telling their children their stories.

What special thing has your wife and children bought for you?

Nothing, and sincerely I haven’t bought anything special for them. I love them and they love me too, we hang out once in a while, we are just a cool family. I am not an emotional person; maybe, they are following my examples. Hopeful, I will surprise them one of these days.

What do you think you should have done better as a father?

I should have married the mother of my child and kept my family in one place. I believe I would have been a better father if I can keep all my family together.

What has fatherhood taken away from you?

How do you combine your life as an actor and father?

It is quite easy for me because I have been an actor before I became a father. Acting is a profession that takes one away from one’s family. Make your family understand your kind of work and the nature of the job. Once they do, it makes things easy for you.

What difference have you noticed in the movie industry when you started and now?

The technicality has changed. The packaging has really improved – the colour, sound and all have largely progressed. Even we, the actors, are improving on ourselves. Even those who do not have the skills are developing themselves. They are acquiring the needed skills.

What is the major challenge in the nation’s movie industry?

The major challenge of the nation’s movie industry is funding. When you have great ideas, there is no money to execute it. If we do not get the required fund for a project, we manage and you can see the effect of such in a movie. We have to cut some critical scenes in a movie because we cannot afford what is takes to shoot such scenes.

What is your advice to aspiring fathers?

I will like to tell them that fatherhood is not a joke; it is a serious business. It takes one’s freedom away from one. It means being responsible for a lifetime. Don’t rush into any marriage when you are not ready. Be convinced that you are ready to do it. When you start, there is no going back. It is a route of no return. As soon as you enter into it, you take up an entirely different life.