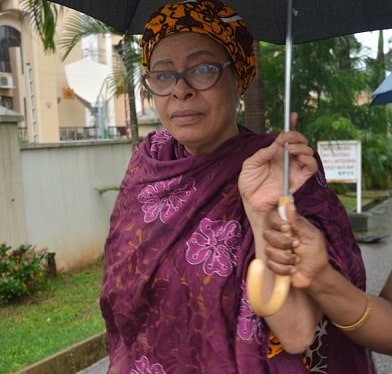 An elderly woman said to be based in the United States of America (USA) Mrs. Isabella Oshodin was arraigned before a Federal High Court in Abuja on Monday on a 25-count charge bordering on money laundering to the tune of N22,964,228,414.

Mrs. Oshodin, who was arraigned along with a company, Oshodin Organisation Ltd, was accused of unlawfully receiving the money from the office of the National Security Adviser (NSA), while Colonel Mohammed Sambo Dasuki (rtd) occupied the office.

The EFCC also alleged that the defendant, on eight occasions received from the office of the NSA funds amounting to $57,217,301.15 into the Escrow accounts of Bob Oshodin Organisation Ltd.

A count in the charge reads:

“That you, Mrs. Isabela Mimie Oshodin, Bob Oshodin Organisation Ltd and Mr. Robert (Bob) Oshodin (still at large) on or about 22nd June, 2014 in Abuja within the jurisdiction of this honourable Court directly transferred the sum of $7,712,598 (Seven Million, Seven Hundred and Twelve Thousand, Five Hundred and Ninety-eight Dollars) to one Portfolio Escrow Company with account number 3102004330 domiciled in California Republic Bank, United States of America which sum you reasonably ought to have known to be proceed of an unlawful act of Sambo Dasuki (rtd), the then National Security Adviser to wit: criminal breach of trust and you thereby committed an offence contrary to Section 15 (2) (b) of the Money Laundering (Provision) Act, 2011as amended in 2012 and punishable under Section 15(3) of the same Act.”

The defendant pleaded not guilty when the charge was read to her on Monday, following which her lawyer, Osahon Idemudia informed the court about a pending bail application filed by the defendant.

Upon the court’s permission, Idemudia moved the bail application, during which he stated that the prosecution was only trying to portray a purely civil contract transaction as a criminal matter.

“This has to do with a civil contract transaction. It is either a misunderstood commercial transaction or someone is being mischievous.

“The defendants sold their furniture factory to the Federal Government for $55million.

“They have only paid half of the money, which the prosecution has calculated as N22.9b.

“The money stated in the charges, which they claimed is money laundering, is actually payment for the purchase of the furniture factory.”

Idemudia noted that a copy of the contract for the sale of the factory has been exhibited before the court, and that the prosecution admitted its existence in the counter-affidavit it filed.

The defence lawyer prayed the court to grant his client bail on liberal terms on the grounds that she was a decent person, who is troubled by the current turn of event.

He denied the prosecution’s insinuation that the defendant may not be available for trial if allowed on bail.

“She is not a flight risk. She is available to stand trial. She is someone, who is ready and eager to clear her name,” the lawyer said.

Idemudia, who told the court that his client was suffering from some health conditions and needed medical attention, having been kept in custody for 70 days by the EFCC, drew the court’s attention to the order it made on August 9, 2019 directing that the defendant be taken to a medical facility.

He said the EFCC was yet to comply with the order and sought the court’s intervention in that regard.

Prosecution lawyer, Mrs. Aisha Habeeb, faulted Idemudia’s argument and urged the court to be guided by the need to ensure that the defendant was available to stand trial.

Mrs. Habeeb noted that Mrs. Oshodin’s husband was in America, and argued that it could be difficult to have the defendant return to stand trial if proper precautionary measures were not taken and she is granted bail and allowed to travel to the United States.

After listening to arguments from both lawyers, Justice Taiwo Taiwo ordered that Mrs. Oshodin should be taken back to the custody of the EFCC pending the ruling on the bail application, scheduled for August 21.

Justice Taiwo rejected Idemudia’s suggestion that Mrs. Oshodin be taken to a medical facility, in furtherance of the court’s August 9 ruling, where she should remain until the day set for ruling.

Instead, the judge directed that both lawyers should work out ways of ensuring that the August 9 order is complied with by the prosecution pending the date set for ruling.