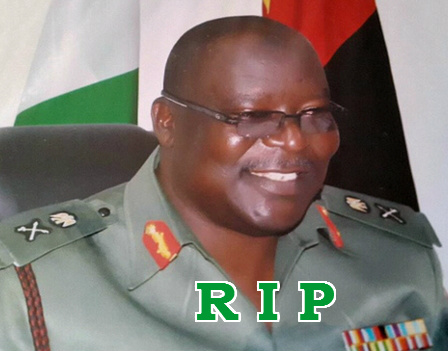 The hero who led the fight against Boko Haram in operation Lafiya Dole last year has died.

General Yushau Mahmood Abubakar died today in a fatal crash along Damaturu road in Yobe after his convoy got involved in a chain reaction crash.

The Acting General Officer (GOC) of 3 Division of the Nigerian Army, Brigadier General Muhammed Aliyu suffered serious injuries in the crash that claimed the life of Abubakar on Maiduguri road in Yobe today.

Injured Aliyu and other army officials have been taken to General Sani Abacha Specialist Hospital in Damaturu for medical treatment.

As at the time of this report, the military is about to take them to Jos for better treatment.

Mad Isoko Woman Who Uses Stones To Knock On Doors In Yaba Lagos About To Be Lynched
Photos: Building Collapsed In Lekki Lagos, 6 Killed As Rain Hits The State Today