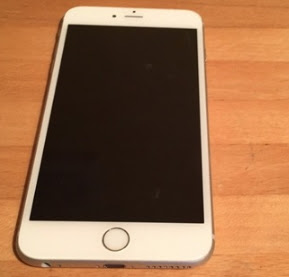 A Nigerian took to the social media earlier today to expose some crooks in police uniform who allegedly stole his expensive iPhone 6s.

Read his pathetic story below:

Yesterday about 9pm my bf and I beat a traffic light on ligali very close to Dominos in Victoria Island (Lagos). We actually stopped at the red light, but because we stopped after the traffic stand itself we could not view the lights .

For some reason cars started horning so we thought it was green light so we moved since we were in front, but we were wrong.

Suddenly about 4 police men jumped in our front, cocking guns ordering us to pullover which we did.

One of the officers told me to come down from the passenger side so he could come into the car which I did. After plenty threats of how we should go straight to Maroko police station, we were like it’s just traffic light we beat na…its not that serious.

The officer then said the fine was 52k. So with that we just knew they wanted money, by then another officer had come to join me at the back seat. We begged them for close to 30 mins that we did not have that kind of money, that we had 10k so we can just go becaus we were tired of begging they did not agree.

For some reason the officer in front who had taken the passenger seat were I once sat, formed vex and got down saying why is his colleague bargaining that kind of money with us. When he left a new officer came and called the colleague at d back seat and spoke to him for few seconds then the new officer entered the car.

We basically ended up parting with 15k before we were let go.

This is the most irritating part of these story.

Barely 10 mins I got to my destination I started looking for my iPhone6s we started calling the phone it was just ringing. I was confused because I had just placed an order so I was so sure I had my phone on me in the car.

The police officer stole my iphone6s. We went back to the checkpoint but the officers were not there again I explained what happened to another officer there who seemed shocked and placed a call to them to come back.

It took them about 30 mins to come back, all the while the phone was ringing. Immediately the officers arrived back at the checkpoint we tried the number but phone was now switched off. I was so irritated, they insisted on searching the car but it wasn’t there. The search for the phone started turning to harassment, plus before they plant something in our car (heard to many police stories) after giving them 15k. Then stealing my iphone6s on top. So we just said they should not worry, we got into the car and drove off.

The daft officers don’t know you should not steal an iPhone because it’s bad market. The phone is useless to the thief and the buyer. If a police officer who is supposed to protect lives and property steal from you all in the name of carrying out his duty then we are in trouble .

My fellow Nigerians please be very vigilant of the Nigerian police when they insist on entering you cars. Guard your belongings. SOME of them are robbers in disguise .