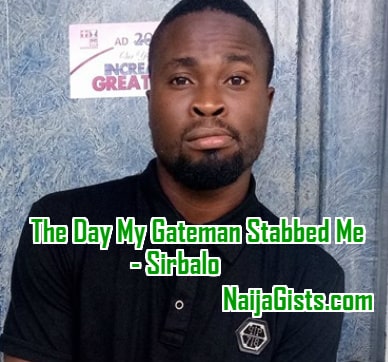 Mr Timothy Obotuke, a budding comedian using the stage name Sirbalo is still thanking God after surviving an horrific attack carried out by his gateman.

Sirbalo in a recent chat with Olushola Ricketts said he only challenged his Togolese gateman to stop tampering with their electricity on the day  he was attacked.

“It was just a little misunderstanding, but the gateman didn’t understand pidgin language. He was always tampering with our electricity and I felt I should caution him on that particular day. He had burnt my phone chargers many times. When I moved closer to him and said it was the electricity that would kill him, he thought I said I would kill him. He got angry and stabbed me in the chest.”

“He was asked to go back to Togo. As I speak to you, I am still recovering. For about 30 minutes after I was stabbed, I was still okay. But later, I became weak and I found myself in the hospital when I opened my eyes.

“The only issue we had with him was the habit of tampering with electricity. We lost a computer to this issue. I was even paid for an advert I needed to deliver on that day; so, I was angry when I saw that he was tampering with the electricity.”

The comedian said he is yet to gather the strength required to shoot his comedy skits.