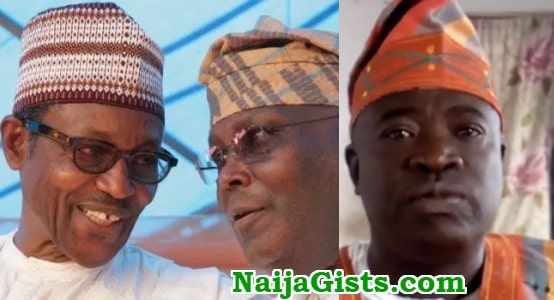 Nigerian Economy Will Get Worse During Buhari Second Term, He Isn’t Our Messiah… Atiku Is Going Nowhere – Prophet Olagoroye

Prophet Faleyimu Olagoroye, anti Jenifa Prophet as he is fondly called has released new prophecies for 2019.

The controversial prophet who predicted that Funke Akindele may never give birth if she doesn’t marry a Pastor or gate man said Nigeria’s economy will get worse in Buhari’s second term.

Here is his 2019 prophetic predictions as made available by YMG magazine this morning:

“Nigerian entertainment industry needs serious prayers. I mean the actors, musicians, comedians and related businesses under entertainment. They should be prayerful so that they won’t lose 12 stars among them this year. I see 12 of them dying untimely. They should also pray against sickness and hardship because they are going to face several tribulations this year but with prayers, nothing is impossible for him to do.

Nigerians should be prayerful because of the covenant on President Mohammad Buhari. His second tenure is going to be tough than the previous ones. Only those who are for God will be favoured in his government. A lot of things are going to happen; the economy will get worse than before because Buhari isn’t our Messiah.

He will win the presidential election in 2019. He will win more than 29 states, Atiku is going nowhere, the money he owes Nigerians is what he is wasting on the election at the moment, Buhari will beat him with more than 2 million votes and the election is a free and fair election.”