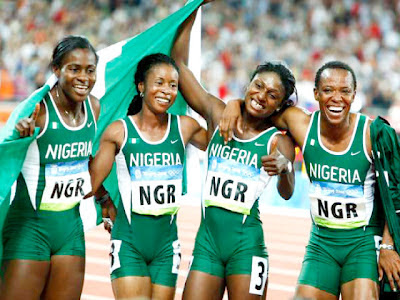 Three Nigerian Female athletes getting ready for the 2012 Olympics have tested positive for illegal / banned drugs in London.

As at the time of this report, Athletics Federation of Nigeria, AFN has refused to mention their names.

On Sunday July 15, 2012, a reliable source confirmed the Nigerian athletes to be:

We learnt Chukwuemeka just returned from a 2-year ban for the use of illegal drugs.

“Chukwuemeka, who knows that if this result is true she will get a life ban from IAAF, has called for the result of her dope test at the African Champion. If that one is negative, then it means something is wrong somewhere. But if it also tests positive, that is automatic life ban for her, ” top NSC source.

Lauretta Ozoh may also share Chukwuemeka’s fate as a second offender. Only George may get a lighter ban as a first time dope offender.

The informed National Sports Commission source also revealed that the leadership of the Team Nigeria camp in Surrey, England has been informed and ordered to decamp the affected athletes immediately. (KUNLE SANNI)

This is serious why are these ladies tarnishing our image?