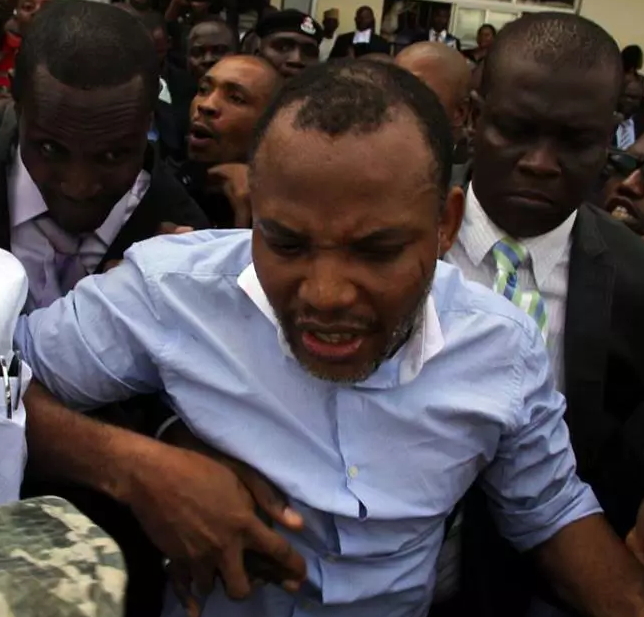 The Federal Government had gone to a Federal High Court in Abuja last Friday to prefer six charges against Kanu, Benjamin Madubugwu and David Nwawuisi.

In the charge-sheet signed by the Director, Public Prosecution (DPP), Mohammed Saidu Diri, for the Attorney-General of the Federation and exclusively obtained by Daily Sun, Kanu and the two others were charged with treasonable felony which is punishable under Section 41(C) of the Criminal Code Act, CAP C38 Laws of the Federation of Nigeria.

“That you, Nnamdi Kanu and other unknown per- sons, now at large, at Lon- don, United Kingdom, between 2014 and September, 2015 with intention to levy war against Nigeria in order to force the President to change his measures of being the President of the Federation, Head of State and Commander-in-Chief of the Armed Forces of the Federation as defined in Section 3 of the Consti- tution of the Federal Re- public of Nigeria 1999 (as amended) by doing an act to wit: Broadcast on Radio Biafra your preparations for the states in the South- East geo-political zone, South-South geo-political zone, the Igala Community of Kogi State and the Idoma/Igede Community of Benue State to secede from the Federal Republic of Nigeria and form them- selves into a Republic of Biafra, and thereby committed an offence punish- able under Section 41(C) of the Criminal Code Act, CAP C38 Laws of the Fed- eration of Nigeria 2004.”

On count two of the charges, the federal authorities also accused the trio of managing an unlawful society.

Giving the particulars of the offence, the Attorney- General said: “That you, Nnamdi Kanu and others, now at large, between 2012 and September, 2015 at South-East geo-political zone and the South-South geo-political zone of Nigeria within the jurisdiction of this honourable court manage an unlawful society with more than 10 members to wit: unregistered with the Corporate Affairs Commission or any other registration au- thority to wit. The Indigenous People of Biafra (IPOB) thereby committed an offence which is punishable under Section 63 of the Criminal Code Act, CAP C38, Laws of the Federation of Nigeria 2004.”

Kanu and the two others were also accused of concealing goods in a container that was holding goods of different descriptions, punishable under Section 47 (2)(a) of the Customs and Excise Management Act, CAP 45 Laws of the Federation.

The particulars read: “That you, Nnamdi Kanu between the months of March and April, 2015 imported into Nigeria and kept in Ubulusiuzor town in Ihiala local Government Area of Anambra State within the jurisdiction of this honourable court, a radio transmitter known as TRAM 5OL concealed in a container which you described as containing household items, which you so declared and that, you thereby committed an offence punishable under section 47(2) (a) of the Customs and Excise Management Act.”

They were also accused on counts four and five of assisting in the management of unlawful society and unlawful possession of firearms respectively. Madubugwu was also charged with assisting in the management of unlawful society: “That you Benjamin Madubugwu in the month of April, 2015 at Ubulusiuzor town, Ihiala Local Government Area of Anambra State of Nigeria within the juris- diction of this honourable court assisted in the man- agement of an unlawful society known as the In- digenous People of Biafra (IPOB) by doing an act to wit, accepted and kept in your residence a container housing a radio transmit- ter known as TRAM 50L, with knowledge that the said transmitter belongs to an unlawful society (known as IPOB) and that you thereby committed an offence punishable under Section 63 of the Criminal Code Act, CAP C38 Laws of the Federation of Nigeria 2004.”

Earlier, while raising the alarm, Kanu’s younger brother, Prince Emmanuel Kanu, told Daily Sun on phone that after the court released his elder brother unconditionally, IPOB members went to the DSS office to complete papers for his release, but that unfortunately, the DSS brought a document for Nnamdi Kanu to sign to the effect he would denounce the agitation for Biafra.

Prince Emmanuel dis- closed that based on the fact that the Abuja High Court granted his brother unconditional release, Nnamdi Kanu rdid not sign the document and the DSS refused to release him on the pretext they were coming up with a treason charge against the IPOB leader.