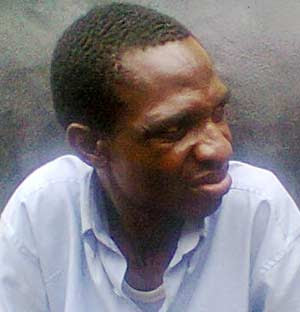 Philip Ogbebor, a local church pastor who was arrested on Wednesday July 3rd, 2013 in Edo State for allegedly having sex with a 20-year-old male church member has claims innocence.

According to report from Edo State Police command, one of his church members reported him to the police for taking advantage of him by having carnal knowledge of him and forcing him to enter into a covenant never to reveal the secret to anyone.

The victim whose name has not been revealed narrates his ordeal saying;

I told him i have never done this since i grew up, but he insisted. It was painful and i told him i will not allow it again. So after the second attempt, i told him i will expose the act. He then administered an oath on me, saying if i ever told anyone, i will die.

He carried sand and olive oil and poured them on my head, then he wore black garment, saying i will die if i ever leak the secret. He killed a black fowl and gave me the liver an gizzard to eat at about 2.am, threatening that if i ever said it out, i will die like the fowl.

But when i realized that it is a sin, i met a man of God to pray for me that God should forgive me and that i am ready to expose it since he forced me. There after i went to the church and told the congregation about the act. When he heard it, he threatened me by sending his younger brother and members of his gang after me. Since then, i have been running.

He even ordered the police to go and talk to other church members to ascertain the truth.

Without much evidence, the police has concluded on this one-sided matter.

I think the Nigerian Police officials should get trained on proper investigation before prosecution.

What if this pastor is indeed innocent?