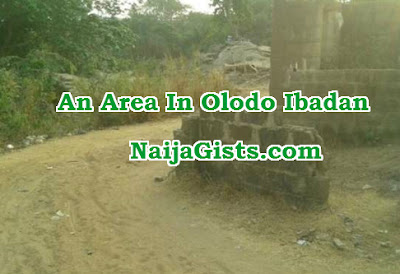 April 17, 2016 – Girl Lured To Herbalist By Wealthy Boyfriend For Money Ritual At Olodo In Ibadan Rescued By Vigilante Men

A 17-year-old Senior Secondary 2 (SS2) student, Ruth Alabi, narrowly escaped being killed for money rituals when her boyfriend lured her to a herbalist’s residence at Olodo area of Ibadan before she was rescued by vigilante men.

Ruth Alabi, who claimed to be an SS2 student at an undisclosed school in Abuja, said she came to spend the Easter holiday with her mother in Ibadan when the incident occurred.

Her boyfriend, Chubuike Omigbo , 33, who sell building materials at Iwo Road area of Ibadan was arrested and paraded alongside the herbalist, Oladimeji Babatunde Ajala ,37, by the State Police Command yesterday.

The State Commissioner of Police (CP), Mr Leye Oyebade, who briefed newsmen on the incident at the State Police Headquarters, Eleyele, Ibadan, told journalists that the suspects had planned to use the girl for money-making rituals before the plan was thwarted by the police.

The CP noted that the suspects were arrested following a tip-off by a strategic partner when the duo was planning to use the girl for money ritual. He said: “The victim’s boyfriend, Chibuike, had lured her to the herbalist’s residence at No. 5, Galilee Street, Olodo area of the state for the purpose of the ritual.

“Luck, however, ran out on them when their evil plan was uncovered through their conversation which was overheard by an eavesdropper. The suspects confessed to being fraudsters and that they had defrauded many innocent victims in the past.”

The police also recovered a black Nissan Altima car with registration no. APP 627 CA, which the police said was bought with proceeds from illegal business. Other items recovered from the suspects were criminal charms, one statute in the image of Jesus, two other statutes and broken bottles spread on a mat.

Answering questions from newsmen, Alabi, who was accompanied by her mother, said she had been going out with her boyfriend for the past four months until the incident occurred. She often met her lover in front of a popular eatery before proceeding to hotel for more intimacy, she added. “But the day this incident happened, Easter day, my boyfriend came with two of his friends and he asked me to enter a vehicle which they brought, and they took me to a hotel where I was asked what I would drink.

I told him that I would take malt drink but he insisted I should take stout. So, I took a small bottle of stout. At a point, one of his friends said I should come with him into a hotel room and there he told me he wanted to have sex with me. I was uncomfortable with that, wondering how that could be. So, I had to lie that I was having my menstruation.

“After, my boyfriend said I should accompany him to another place but I told him it’s already dark, that my mother had been calling my phone and that I would like to return home. He continued to pester me until he took me to the place, and when we got to a place, he was calling some of his friends and I was afraid because it was already 10:00 p.m. That was all I know.”

The victim was said to have slumped on the way to the herbalist’s residence, attracting vigilante men who called the police. When the police arrived, Alabi was rushed to a nearby hospital in an unconscious state before she was revived.

While in the hospital, the girl said that a medical examination revealed that the stout she drank was laced with drugs.

Interviewed, the two suspects denied planning to use the girl for rituals.