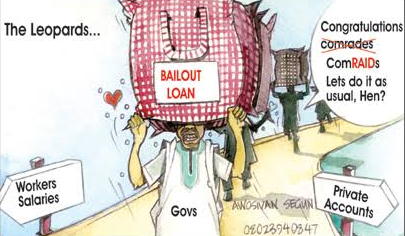 January 27, 2017 – Nigerian Governor Duped By Texas Based Mistress After Diverting $10Million Bail Out Fund To Her

A serving Nigerian governor is under probe after he allegedly diverted $10million to his Texas-based girlfriend.

The money which is part of the bailout fund Buhari released to State governors last year has been traced to a private bank account in the United States of America.

The governor whose name was not released due to the ongoing investigation is said to be from one of the oil producing states.

He reportedly used his Texas-based mistress to launder the funds abroad in order to prevent security agencies from monitoring him.

The bubble bust when the mistress created an uproar that triggered the investigation of the criminal deal between the lovers.

Here is what a security source said about the governor in question: