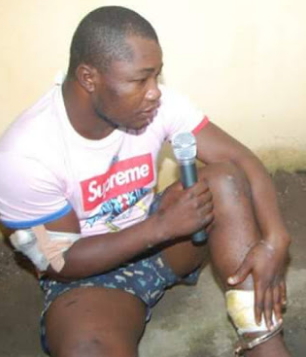 The invaders also ferried away a notorious kidnap suspect, Henry Chibueze, popularly known as Vampire, who had been brought to the court from Owerri Prisons.

It was a horrific sight as judges and lawyers struggled to scale the perimeter fence to escape from the gunmen that sacked the court.

No fewer than three Judges and one Magistrate were reported to have sustained serious injuries in the process and were taken to unidentified hospitals.

It was also gathered that the soldiers on guard at the gates of the court fled on hearing the sound of the sophisticated weapons used by the gunmen.

An eyewitness of the incident said the gunmen, numbering more than six, stormed the courtroom where the suspect and 49 others were standing trial and opened fire on the security operatives that guarded the accused persons.

Having overpowered the security men, the source added, the gunmen whisked Vampire away after shooting sporadically for several minutes.

The source said: “We were here in the court premises when a lawyer came to call us to enter Room 3 for hearing.

“Shortly after that, we started hearing sporadic gunshots. About six gunmen entered the courtroom and started shooting.

“They came in a jeep (SUV) and eventually whisked away one of the inmates prisons officials had brought to the court.

“Some prison wardens were killed while other people in the court were wounded.”

Vampire was arrested in 2015 by the Department of State Security in Imo State while allegedly planning to kidnap some judges who were in the state for a conference.

He was later arraigned, after which he was remanded in prison.

It was later discovered that Vampire was still operating his kidnap syndicate from prison after a warden he recruited into the gang was arrested.

Vampire was also reported to be living large in the prison as the prison authorities allegedly allowed him certain privileges, like using his phones and having access to his girlfriends.