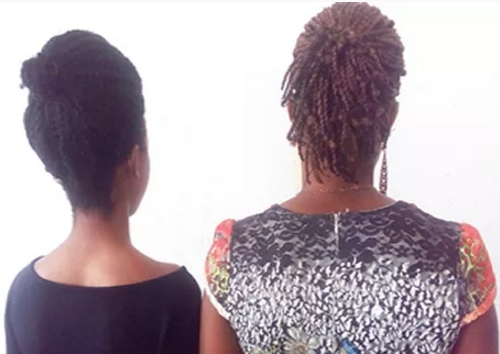 March 5, 2016 – Nigerian Grandmother Who Lured Girls To Work As Prostitutes In Libya Arrested

A Nigerian grandma has been arrested for trafficking over 100 Nigerian girls to Libya for prostitution and keeping them locked underground. The granny, identified simply as Mrs. Bankole, is now in the custody of the National Agency for the Prohibition of Trafficking in Persons (NAPTIP).

A Human Rights Group, Alliance of Rights Defenders (ARD), was behind the busting of the syndicate. The syndicate allegedly used to traffic young girls from Nigeria to Libya for prostitution. Bankole ran the prostitution ring with her daughter, Alhajat Lateefat, and son-in-law Alhaji Sanni.

Operatives are now hunting for the couple. Trouble started for the syndicate when ARD acted on petitions written against Bankole.

Two girls had been rescued from Libya. One of the girls, Miss Nafsat Omobolanle, a nurse, said: “One of our relatives introduced me to Lateefat. We heard that she used to help people travel to America to get jobs.

She told me that her brother was in America and would take me to the US to get a job. I paid her husband, Alhaji Sanni, N500, 000. Lateefat later collected another N500, 000 from me. She said it was for my accommodation and other expenses.

After paying her the money, she said plans had changed. She said we were no longer going by air.” Omobolanle said Lateefat put them in a bus; the bus left Lagos to Kano. In Kano, the girls were moved into a truck and the desert journey started.

She recalled that there were about 25 to 40 people in the truck. They started the journey on December 28, 2015. She saw people falling off the truck and dying on the way. She said that when they got to Niger, they were handed over to another cartel. Omobolanle said: “When we got to Niger, soldiers there brought all the ladies down and flogged us with whip. They raped some of the girls and stole money from us. They flogged me too but I was not raped; I had money to give them.

I fasted and prayed all through the journey for God to spare our lives. At a point, I begged them to take me back to Nigeria.” Omobolanle said that when they got to Agadashe, Libya, Lateefat gave them garri, groundnut, five litres of water, powdered milk, Milo, blanket and jackets. She said: “About 20 of us slept in one room.

It took us 11 days to travel by road and the experience was horrible and deadly. We saw girls between 12 and 15 years in the rooms. There were up to 100 of them. We were not allowed to make calls. They seized our phones. I started troubling Lateefat to take me to America as she had promised.

I had to find a way to reach my family. I called for help. The human rights people came to my rescue. Two of us were rescued. But Alhaji Sanni and his wife had planned to have us killed on the way.” Omobolanle said that she saw many girls being forcefully deflowered by insertion of cucumbers into their private parts. She said: “The girls were made to sleep with men for 10dina (N1000) for a round of sex and 50dina (N5,000) for overnight.

Two girls named Dorcas and Joy died in my presence. Alhaji got a flight for us to return to Nigeria after pressure from the human rights group. The plane stopped in Ghana. Lateefat gave us white and green dresses to wear. We thought she wanted us to wear good clothes, we didn’t know she used the clothes to mark us out.

She had hired an assassin to kill us but God saved us. We entered Nigeria on January 23.” The girls’ rescue started after ARD received petitions from their families residing in Lagos and Ogun States.

The families alleged that their daughters were trafficked from Nigeria by a cartel allegedly headed by a couple identified as Sanni and his wife Lateefat. Bankole allegedly used to operate from Ogun State.

Part of her job was to lure girls to Libya for prostitution for her daughter and her son-in-law. The President of ARD, Barrister Ojay Akinwale, a human rights lawyer, said after receiving the petitions, ARD sponsored a private investigator to Libya. Akinwale said:

“We got complaints from the families of one Yusuf Hafsat Omobolanle and one Basirat Lamidi that their daughters were trafficked to Libya by one Mrs. Bankole, Alhaji Sanni and his wife Alhaja Lateefat.

We employed a private investigator, a former crime reporter, Prince Tunji Oshokoya, to track down this cartel. Following his investigation, we found out that the two ladies were trafficked with fake passports to Libya. They went by road through the desert.

They were taken by Sanni and Lateefat to Libya to work as prostitutes.” Akinwale disclosed that the cartel collected between N500, 000 and N1 .5 million to traffic girls by road. He said that the girls were forced to take oath of allegiance and when they got to Libya, their passports were seized.

They were later forced into prostitution. Revealing how he tracked the cartel to Libya, Oshokoya said: “I went to Tripoli in Libya, where I tracked the girls to a brothel called New York. The head of the cartel, Alhaji Sanni and his wife, were in charge of the girls. “They are known as Baba Tawa and Mama Tawa in Tripoli.

This couple is highly connected in Libya and in Abeokuta. I insisted that the two ladies should be returned to Nigeria. She agreed to release them to us after signing an agreement. We lured Lateefat to Nigeria and she was apprehended by the police.

She promised to give me N2m as bribe to back off. I refused.” Oshokoya said that during his investigation in Libya, he discovered that the couple ran brothels in the country where over 500 girls were kept for prostitution. He said the girls were placed in underground rooms. He said: “A girl is made to sleep with 10 to 15 men in a day.

This cartel made these girls to swear to a false oath of secrecy. They seized their phones and wouldn’t allow them to communicate with their families. The girls live in a tiny room and are fed with oil and flour once a day. We have video recordings of this hell of a brothel. We handed the information to NAPTIP. Some of the girls died from AIDS.

Others are raped in what is called baptism of the virgin done by Sanni and Libyan men.” Revealing Bankole’s role in the cartel, Akinwale said: “Mrs. Bankole, the mother of Lateefat, used to deceive parents and guardians into allowing their daughters to go to Libya.

“She would tell them that their daughters would earn good money doing jobs like hair dressing and tailoring. She’s also the one that used to take the girls to the shrine for oath taking.” Akinwale said that the arrest of Bankole was facilitated by NAPTIP in Lagos. Lateefat escaped. Akinwale said: “When we went to Abeokuta to arrest Lateefat, her sister came out of the house and started shouting thieves! Thieves! That was how her community members came out and attacked the NAPTIP officials with broken bottles.

They overpowered the NAPTIP officials and policemen. Lateefat escaped and is now in Libya.” Akinwale said that since the arrest of Bankole, NAPTIP had kept him and his organisation in the dark. Another victim, who is yet to be rescued, is 26-year-old Ebunoluwa Lawal.

Speaking via phone, she said she and other Nigerian girls in Libya were desperate to return home, but didn’t have money for flight tickets. She said she was trafficked in 2012 and later escaped. Since her escape she had been in hiding.

She said: “I was a fashion designer in Abeokuta before I was lured to Libya. They told us that they were taking us to Spain to work as sewing mistresses. We were 40 girls in number. My parents didn’t know about the journey.

We were kept in a room in Libya and forced into prostitution. I ran away and had been in hiding. We want to return home, but we don’t have money. ”We went to the Nigerian Embassy, but they sent us away.”