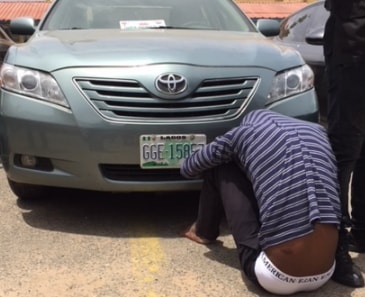 Michael Williams, a 28-year-old medical doctor on Sunday told journalists in Lagos that Nigerian banks must upgrade their systems in order to protect their customers’ funds. Williams, who was arrested by detectives attached to Special Anti-Robbery Squad (SARS), Lagos, for allegedly hacking into people’s accounts, said the Nigerian banks were the easiest in the world to hack.

The suspect was arrested after he allegedly generated N28 million bank alert to defraud a car dealer of a Porsche car. He was paraded alongside other suspects at the state Police Command Headquarters by the Commissioner of Police, Imohimi Edgal.

According to Edgal, the suspect has the ability to shut down CCTV cameras for 67 minutes, using software. He said: “On March 23, my office received a complaint that there exists a syndicate that goes to car shops to buy a car and configures a computer programme that would send a fake payment alert to the seller and by so doing, obtains the car under false pretences.

“Such was the case of Abidogun Adewale whose car shop played host to the leader of this syndicate by name Michael Thompson Williams, who bought a Porsche car at a whopping price of N28,000,000. “He thereafter requested for the seller’s bank account number and made it look like he had paid him via the fake alert to his phone using HTTP tunnel. com. “The suspect thereafter, drove the car away unknown to the seller that he had been scammed.

However, based on his complaint, a manhunt was launched for the fleeing suspect. “Immediately I availed the detectives of the Federal Special Anti-Robbery Squad (FSARS) all necessary intelligence assets which led to the arrest of the suspect in Lekki area of the state.

Edgal added that the suspect advised him to tell bank operators to get someone to protect their customer’s accounts in Nigeria. According to Williams, most Nigerian bank accounts have less security that is why it is easy for hackers to hack into their accounts. The commissioner said the modus operandi of the suspect who, according to him, has a good mastery of cyber environment, is that he creates a credit card through Cyber Ghost 12.

He said: “When the credit card matures, it is then funded through a hacked Swiss account. Any transaction anybody is doing through Swiss account the suspect manipulates such and wires the fund to his contrived credit card.”

The suspect, who spoke with journalists under strict supervision of the commissioner, said hacking into people’s accounts was easy with the aid of Cyber Ghost App 12, HTTP/ tunnel.azinytv4/vpn (virtual private network).

He said: “Through the credit card, one could buy software he needs to work with and protect his job so that he cannot be traced. Such software is known as vpn and word cyber protector e.g Dare Devil. It also enables someone to do deductions and transactions per dollar from every individual domiciliary account. “It is also easy to shut down CCTV camera on Dare Devil and break 256 codes on CCTV.China.com.northkorea. code untouchable.tracker.com. “This enables me to shut down any working system of my interest on yt.com, Internet sophistication e.g. youtube/facebook to make them unworkable for 67 minutes.

Although I am not a computer scientist, I’m a professional hacker.” The suspect claimed he had worked at Tolu Hospital and Eko Hospital before travelling to Canada. He added: “While in Canada, the building where I was staying was filled up so I had to move in with a man who is from Israel. He was the one who taught me hacking. “When I asked how much he had made through hacking, he replied ‘I get money online not from any individual. It is a free world online. I have no idea how much I have made. I target Hollywood actors like John Travolta who does transactions every week’. “I have intercepted money worth millions of dollars online and diverted them into a credit card which I created. When you are a hacker, you are a bank to yourself.” Edgal, however, said the case was still under investigation.