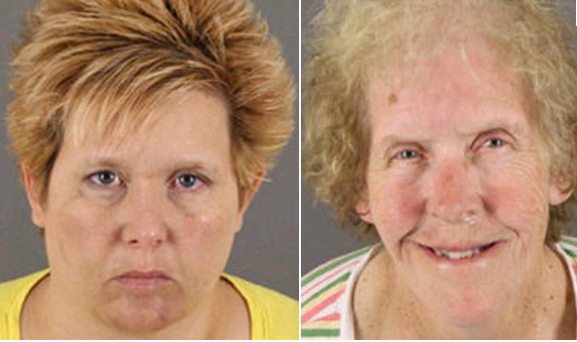 Yahoo yahoo as it is has become a global phenomenon.

Most of these supposed Nigerian Internet Scammers are not only from Nigeria most of them hails from popular countries of the world including United States, Spain, Italy, Canada,etc.

A mother and daughter, Tracy and Karen Vasseur were recently arrested for alleged violations of the Colorado Organized Crime Control Act, Money Laundering and Theft in Nigerian Internet Romance Scam.

41 year old Tracy Vasseur and 73 year old Karen Vasseur of Adams County, Colorado of were both accused of being part of a “Nigerian internet romance scam” which involves people pretending to be members of military family serving in  Afghanistan

According to reports, Tracy and her mother Karen tricked women into relationships and accepted huge payments via wire over a 3-year period.

According to prosecutors, 6 of their victims currently live in Colorado.

Further investigation revealed that there are 374 victims in total from 41 countries which includes the United States.

How Tracy and Karen Vasseur Carry Out Their Scams

The indictment claims the mother-and-daughter scammers took a percentage of the stolen money and then wired the remaining money to associates in Nigeria.

They allegedly established 20 personal and business bank accounts at 11 local banks for the purposes of laundering stolen money. The business was listed under the name A-Team Distributions Inc. and KKJ Services.

As part of the scheme, Tracy also allegedly used her own 16-year-old daughter to fraudulently receive stolen money and then wire it to Nigeria.

NaijaGists.com recently got a complain from someone who received an email from a man in the United States claiming he want to add him to the list of beneficiaries of Dana Air Crash. The man used our news report of Dana Air Crash victims to initiate the scam. Please be aware of any phishy email.

These scammers are all over the world.