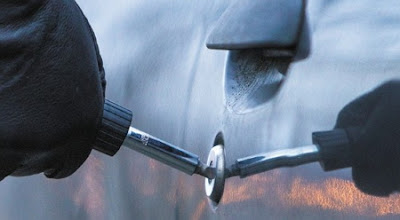 October 24, 2017 – Nigerian Jailed In US For Car Theft Arrested For Buying Stolen Vehicles In Lagos

The Officials of Lagos State Police command have arrested one Onyekachi Osunkwo, 35, who admitted to have bought stolen vehicles.

Osunkwo, who claimed to have been imprisoned in the United States in 2014 and in Nigeria the following year for the same offence, said he was glued to the business because he made good profit from it.

According to him, he usually sold each vehicle and made 100 percent profit, adding that his supplies brought stolen vehicles for him at least twice weekly.

The Imo State indigene said he was introduced into the business by one Ndubuisi when he returned from abroad, adding that though he made so much money from it, he had done nothing tangible with the money.

“I usually help people. If I buy a car for N400,000, I sell it for N800,000. From the profit, I usually assisted people with needs. I haven’t done anything tangible with all the money I made from buying stolen cars.

“There was a time I had so much money that I wanted to pay my landlord three years upfront. But I did not because I did not want him to start suspecting me. So, I usually paid him yearly. I was arrested at my residence in Iba Estate. They didn’t tell me what my offence was. They just told me to follow them to the station and it was when I got here that they said I usually bought stolen vehicles. I didn’t argue. I have already told the police everything I know.”

The police said Toyota Sienna buses marked LSR246EL and EKY434CA, as well as a Toyota Corrolla car APP09SN were recovered from Osunkwo, urging the rightful owners to come forward with evidence and claim the vehicles.

Continue Reading
You may also like...
Related Topics:car, jail, nigerian, theft, us