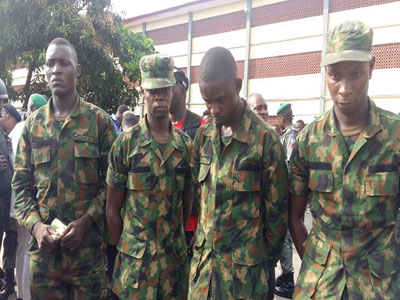 Lagos Police Command on Monday paraded four new recruits of the Nigerian Air Force (NAF) and seven others, including the state Water Corporation employee, for ‘vandalising’ water pipes worth about N25 million.

They were contracted by a Water Board’s employee, Olayiwole Oyedele, to provide security for him last Saturday.

It was gathered that Oyedele sold the pipes to Alozie for N650,000 and had already collected N200,000 before the arrest.

According to Oyedele, he agreed to pay the soldiers N35,000 for their service, adding that Wole collected N20,000 as advance payment.

He said: “I have been a civil servant with Lagos State Government for over 22 years. I work with the Water Corporation. The pipes are scraps that we abandoned after installing new ones.

“I was not supposed to carry them but the buyer (Alozie) contacted me that the one that was auctioned to him has finished and he wanted more.

“So, when we went to carry those ones where they were abandoned, hoodlums in the area refused.They did not demand money but they said we would not carry them.

“That was how I contacted one of my relatives and told him I needed some soldiers that would help scare the hoodlums away and also escort the pipes to China Town, where the buyer wanted them delivered.

“It was Akingbola (Wole) that he introduced me to. He was the one I gave the money to and he brought his other colleagues. I did not discuss anything with the others.

‘’It was at the point of loading that policemen came and arrested us all.”

But the soldiers claimed they never knew that Oyedele was stealing the pipes, adding that they discovered it at the scene when they saw that the pipes were government property.

Wole, who admitted that he collected N20,000 from Oyedele, said the others did not know the amount paid.

He claimed that he demanded to see a note instructing Oyedele to carry the pipes when they got to the scene, adding that he took the note to the police for confirmation.

Wole said: “I did not know that he was stealing the pipes. When he called me, he said that he wanted escort to carry some pipes. I told my course mates that we were going for guard duty at a wedding.

“I told them that the person in charge provided transport for us but I did not tell them how much. It was when we got to the scene that they knew that it was pipes. But when I saw the pipes, I told the man that they were government property and that we need to see a pass.

“He showed us his identity card that he worked there and also showed a letter that indicated he was permitted to carry the pipes. I told my other colleagues to wait there and I went to the police station to confirm the man’s claim.

“But before I got to the station, I saw that the police have already arrested them and told the civilians among them to sit on the ground.”

The other soldiers lamented that they knew nothing about the deal, insisting that they were only out to help a ‘relative’ of their course mate who was supposed to be at a wedding.

There was, however, mild drama at the parade ground after Ezemba started wailing, insisting he knew nothing about the crime.

Ezemba, a lottery man, said he was only watching in amazement as policemen arrested the soldiers when he was roped in.

He said: “I do not know anything about it. I am a lotto man and was passing by when I saw policemen arresting soldiers. I was surprised because I did not know police could arrest military people. I was watching and the next thing, they arrested me. My family members do not know I am even here. I am innocent.”

Parading the suspects, Acting Police Commissioner Imohimi Edgal said they were arrested around 11:42am on Saturday, following a tip off.

He said: “We received information that some group of robbers with some Air Force personnel wearing military camouflage were at Doyin Bus Stop, Orile vandalising iron pipes belonging to the Lagos State Water Corporation.

“They had one clerk crane and an Iveco 63 truck marked MUS772 XD. Two decoy teams of SARS operatives were mobilised to Orile to monitor the situation and, in the process, seven of the suspects were arrested while vandalising the iron pipe with four Air Force personnel giving them security back up to avoid police interference at the point of loading the iron pipes.

“The Air Force personnel would be handed over to their Commanding Officer while the other suspects would be charged to court.”

Continue Reading
You may also like...
Related Topics:arrest, Policemen, robbery