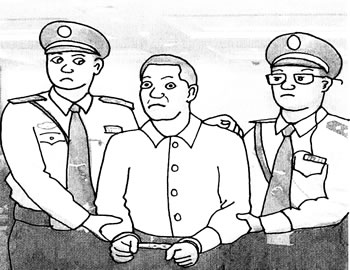 July 8, 2016 – Nigerian Journalist Beat Up Father & 2 Policemen, Locked Them Up While Resisting Arrest In Meiran Lagos

A young man who beat up his father in Meiran suburb of Lagos last month has been docked.

The suspect identified as 27-year-old Tobi Majoyegbe was today arraigned for allegedly beating up his dad and two policemen while resting arrest at their home at 8 Gabi Crescent, Meiran.

Also charged along with him is his friend Taiwo Tayo, a real estate agent.

According to Clifford Ogu, the police prosecutor handling the case, Tobi’s parents were fighting and instead of separating them, he joined his mother to beat up his father.

“The accused’s father, Mr Victor Majoyegbe, went to the police station for his son’s arrest.
“When the policemen went to the house, Tobi and his friend, Taiwo, resisted arrest and beat up the officers on June 2nd, 2016” .

Ogu said the accused also locked the door against the police officers and stole a phone valued at N45,000 and a belt worth N2,000 belonging to them.
“The valued of the stolen items belonging to Sgt. Banji Gegeleso and W/Sgt. Obiageri Osuafor is N47,000.”

The case will come up for hearing on the 1st of August.