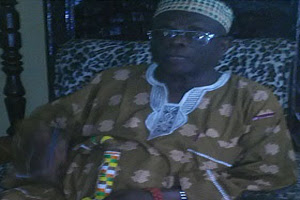 Hear what the monarch said about his abduction and what he went through in the den of his kidnappers.

When they abducted me that day (Saturday July 16), I did not actually know where they were taking me to. It was all like a dream to me. They carried me like a child -naked-because I was in my boxers. After few hours on water, they stopped in a place. I think it was their first camp. I told them I wanted to have a bath and they allowed me. After some time, it rained and we had to relocate to another camp where they prepared a wooden bed with a mattress for me.

On that day (of kidnap) I told them (kidnappers) that it was God who gave them the power otherwise it would not have been possible for them. I was practically with nothing on me except my boxers when they came. When they took me there, (jungle) they told me they were asked to kill me but later they changed their mind. The change of mind, to me, was because I understand that while I was away, Christians, Muslims and traditionalists consistently prayed for me here. God answered their prayers.

I will never forget this experience that I called a ‘drama’. I was sleeping one day on the bed the abductors prepared for me. But I think at a point when the abductors were demanding a ransom and the initial negotiations did not suit them, the boys came all of a sudden, pulled the mattress off me and threw it away. Thereafter, I slept on the ground for two days.

They did not rough handle me at all because I told them they had to treat me as a father.

Continue Reading
You may also like...
Related Topics:kidnappers, King, nigerian