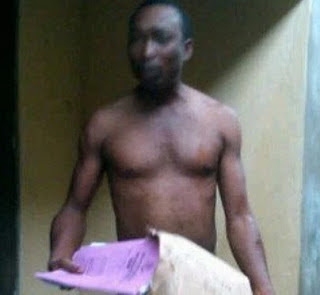 A randy lecturer who has been harassing a student in the Education Department of Delta State University has been arrested.

The suspect (names withheld by request) was caught naked at the Wembley Hotel in Abraka as he was about to take on the female student.

On July 21st, the victim ran to the police station to report the lecturer for harassing her sexually and threatening to fail her if she refused to yield to his sexual demand.

The victim was told to agree with the randy lecturer’s demand and inform detectives of their planned meeting location. She agreed to his demand and a date was fixed at a high class hotel in Abraka.

Based on the complainant’s feigned acceptance of the suspect’s demand, she was taken to Wembley hotel, Abraka, by the suspect, where detectives were invited and arrested him in the hotel room after he had already undressed”.

Continue Reading
You may also like...
Related Topics:delsu, lecturer, student