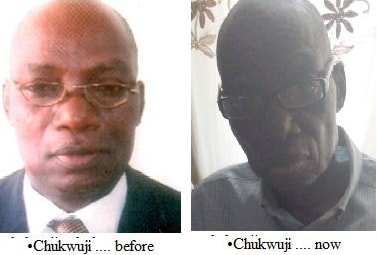 By Chinaka Okoro, The Nation

Barrister Ilom Chukwuji is a practicing lawyer with considerable years of experience. He is amiable and his humane disposition has endeared him to many people, especially his clients. He hails from Ejeme-Aniogor in Aniocha South Local Government Area of Delta State.

All through his years as legal practitioner, Barrister Chukwuji, as he is fondly called by his clients and admirers, has been so active and in perfect health state. But in December, 2016, his health took a dangerous nosedive as he began to experience what he described as “drastic negative changes in my body system.”

Though he was somewhat strong and energetic to go about his legal duties, he could notice that he was not as vibrant as he used to be.

“I could not eat neither could I do any other thing that I used to do. I was restless,” he said.

The unsavoury situation compelled him to visit his family clinic in order to find out what the matter was. “The personnel in the clinic diagnosed food poisoning. They placed me on drips to detoxify my system for three days during which it subsided. After some days, my health situation relapsed,” he said.

In mid-January, 2017, he had to visit the Lagos State University Teaching Hospital (LASUTH), Ikeja. To verify what the ailment was, he had to undergo series of tests.

At a point, the doctor instructed that he should go for colonoscopy test because he suspected cancer of the colon.

It was after the colonoscopy test that the doctor confirmed he had cancer of the colon. Having established what the ailment was, Barrister Chukwuji started the process of treatment in the hospital.

He said he was referred to a surgeon who suggested that he should visit an oncologist. The oncologist he met recommended the drugs he would be taking so that he can start off the Comotherapy and Radiotherapy.

Worried about his state of health, Chukwuji narrated his ordeal to one of his professional colleagues who advised that he should not take the orthodox approach to the cancer treatment, opting, however, for the integrated medicine approach.

“When I discussed my ordeal with one of my professional colleagues, he advised that I should go for the integrated approach rather than the orthodox method of treating the cancer ailment. He then referred me to a Wellness Centre here in Lagos for medication.

“The doctor at the Wellness Centre took time to study all the medical reports I brought, after which the doctor said the cancer had reached stage four which she described as the last stage. She even expressed surprise over my ability to still move around and do some other things on my own; judging from the dangerous level the cancer had reached.”

“She placed me on intensive treatment using organic medicine which comprised natural remedies. The doctor prescribed what I should eat and what not to eat; changing my diet routine completely.”

“From February to September 1, 2017, I never ate any cooked food. I ate only fruits, vegetables and other liquid extracts. It was on September 1, 2017 that the doctor said I should eat something which was moi moi.

“Before that September, I had crisis during which I almost passed out, but the doctor was able to manage the situation and I survived the life-threatening crisis.”

Barrister Chukwuji said cancer is a very dangerous ailment, even as he added that it is such that drains the resources of the sufferer and his relations.

“Using the integrated approach to treat cancer is as expensive as the orthodox method. My children, relations, close friends and well-wishers have contributed immensely towards ensuring my being alive at the moment. But they have exhausted all they had. There are some drugs the doctor prescribed for me but I cannot afford them due to lack of money because we have spent huge sums of money to get to this point. The last time I visited the Wellness Centre, it was discovered that my health situation has relapsed because I have not been taking the prescribed drugs.

“The doctor said N3 million was needed for maintenance process to begin, and which will lead to total cure of my ailment.

“It seems N3 million is preventing me from living my normal life again. That is why I am seeking financial assistance from well-meaning Nigerians to help me to accomplish my desire to continue living.

“I know God will spare my life in order to praise Him in the land of the living. I was so much encouraged and my hope to live emboldened after reading a book entitled Love, Medicine and Miracles by Bernie S. Siegel (MD).

Another report by Union Diagnostic and Clinical Services Plc on February 3, 2017 and signed by the Consultant Pathologist Dr K. O. Aramide has these Clinical Details:

“Microscopy: Sections of the biopsy show a malignant epithelial neoplasm composed of pleomorphic cells having vesicular nuclei and prominent nucleoli and scanty cytoplasm. “The cells are disposed in small nest and single cells in a highly desmoplastic stroma. There is marked chronic inflammatory cells infiltration.

“Features are those [of] a poorly differentiated adenocarcinoma.

A third medical report carried out at IKEJA X-RAY CLINIC, Lagos Airport Hotel Road on July 26, 2017 and signed by one of the Radiologists reads:

“ABDOMINAL SCAN: The liver is enlarged spanning 184.8mm with a well circumscribed round heterogeneous solid mass with some cystic components in the porta hepatis adjacent to the gall bladder and abutting the visceral surface of the liver. It measures 132×113.6x82mm in longitudinal, transverse and AP dimensions respectively. There is no focal or diffuse hepatic lesion in the other regions of the liver. The gall bladder is normal in content and wall thickness. The biliary tree is sonographically normal…

“There is prominence of a splenic vessel. However, the spleen (span 113mm) is sonographically normal. The pancreas appears sonographically normal…There is marked hydronephrosis of the left kidney and thinning of its cortex with its upper pole cortex measuring 82mm in thickness…The urinary bladder is well filled with urine. No intra vesical or bladder wall lesion is seen. There is a hypoechoic solid mass with an irregular outline involving the rectum. The mass appears extrinsic encasing the involved rectal segment and extending to surrounding structures…”

Undaunted by the pains and agony he has been experiencing since 2016, Barrister Chukwuji resolved to “fight the cause bear-like.”

“I cannot resign to fate. I am confident that God will spare my life by making people to help me to live my normal livfe again. I am strengthened by the realisation that there are many Nigerians who are always moved with pity on any one that needs help in order to live normal life again. I am pleading with such benevolent Nigerians to come to my aid so that my life is not wasted by this unkind and dangerous ailment.”

He expressed his appreciation to those kind Nigerians who had contributed so much in kind and in cash to ensure he did not die.

“Nigerians are wonderful people. They are always willing to help one another in times of need; no matter one’s religion, ethnic group or political affiliation. I am surviving this life-threatening ailment because some well-meaning Nigerians stretched their hands of assistance when they were approached. God will not forget them in their time of needs and will prevent this kind of situation from being their portion.”