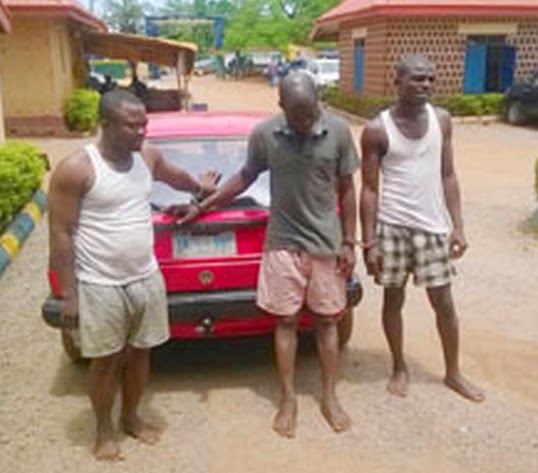 May 22, 2015 – Nigerian Man Deported From Greece Arrested For Robbery In Enugu

Ebonyi State Police Command has busted a robbery syndicate. One of the suspects was said to have been deported from Greece.

The three-man gang, it was gathered, robbed one Mrs Maureen Nnebuife of the sum of N650,000.

They have been paraded at the State Police Command headquarters, Abakaliki, by the Commissioner of Police, Maigari Dikko.

The CP said the command’s Security and Investigation Bureau nabbed the suspects after a painstaking investigation.

The suspects included one Okechukwu Okolie, 27, who reportedly returned from Greece recently. His residential address was given as No. 23 Iweka Road, 9th Mile, Enugu State. Another suspect, Nnabude Onwudiwe, 28, was said to hail from Achi Village, Oji-River, Enugu State, while Sunday Achu, 38, of Umulokpa Nsukka, Enugu State was named as the third man in the gang.

The CP said: “Along Afikpo Road close to Romchi Park, the trio-in-crime accosted Maureen Ekechi Nnebuife, 29, residing at No. 7 Convent Road, Abakaliki and beguiled her into their red-coloured Golf car with registration number Ondo AM 763 NND”.
“One of the miscreants feigned to have just arrived from Greece and didn’t know his way around town and needed to be directed to any nearby Eye Clinic for medication”.

“While in the car, the said woman was dispossessed of the sum of N50, 000 cash which her husband sent her to…deposit in a bank”.
“Not yet done with her, the crooks forced her under threat to her mother’s residence at Onueke and robbed her of N600, 000 cash which the poor woman trades with in her meat business”.
“On a tip-off, the hoodlums were trailed to Spera en-Deo Junction and nabbed by Sub operatives. The aforesaid red Golf car was recovered as exhibit”.

One of the suspects, Okechukwu described his gang as OBT people (419ners), explaining that their victim was robbed for her greediness.

He said: “It is out of her greediness and that was why she was robbed. I was deported from Greece because of the crisis there and this is just my two months I was deported.”
On his part, Sunday Agu said he ventured into crime after being duped in his trading business.

The CP who was represented at the event by the command’s spokesman, DSP Chris Anyanwu said the command also rescued one Chidinma Nwaji, a 28-year-old man from a thick forest in Cross River State after he was abducted by ritual murderers.

He said: “On the 6th day of May, 2015, Chidinma Nwaji, a 28-year-old man of Ikenyi Ndiebor Ezza-Inyimagu, Izzi Local Government Area, Ebonyi State embarked on a journey back to his place of abode”.
“When approaching the Motor Park, he felt that somebody whom he couldn’t recognise tapped him and from that moment he lost consciousness and never knew any other thing that happened to him until he recovered and found himself in a strange bush”.

“On getting wind of the disappearance of the said Chidinma Nwaji, operatives of the Anti-Kidnapping Squad of this Command swung into action and trailed the victim to Okondo Village in Ogoja Local Government Area, Cross-River State where he was eventually rescued on from a bush”.

“He confided in the operatives that the hoodlums who abducted him wanted to kill and use him for money rituals but fortunately when they cut his forehead and took his blood sample for test, the witch doctor rejected it, saying that his blood is not the type required for the rituals”.

DSP Anyanwu said investigation is ongoing to unravel the miscreants behind the dastardly act.