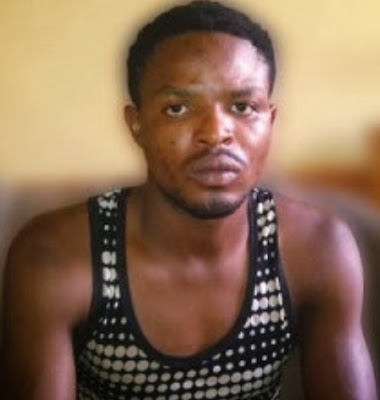 The gentleman pictured above has been arrested by Lagos Police officials for killing his boss. The 22-year-old who killed his manager, Sylvanus Okoye said he did it self defense.

According to police report, Eji Emmanuel stabbed 39-year-old Mr Okoye to death at his house in Okota back in August and fled to Anambra state.

He alleged that on the day of the incident, Okoye had attempted to rape him. Eji Emmanuel told police he works as a dancer in Anambra before being lured to Lagos by his friend, Chukwudi to work. He later found out that Chukwudi plans to introduce him to homosexuality.

He said the matter was transferred to the Zone 2 Police Command and the case was turned against him after which he spent two weeks in detention.

He said he had approached Okoye, who he considered an Igbo leader in the state, to help him with money to return to Anambra State when Okoye also attempted to rape him.

I went along with a relative to report the matter to Okoye and he gave my friend and I N5,000 and shirts. He told us not to worry, so we slept over at his house. At midnight, however, Okoye came to my room and attempted to have sex with me but I refused him.
My relative later told me that Okoye had sex with him in the parlour that same night. We left in the morning and returned to Anambra State. From there, I went to Abuja where I remained for four months. However, one day, Okoye called me that he had a business deal and invited me to come to Lagos.

I told Okoye that I would not engage in any act of homosexuality and he agreed.
The suspect said when he returned to Lagos, the deceased said he wanted to open a bar in the area and wanted him to manage the business.

He said he passed the night at the deceased’s home, but at midnight, the deceased crept into his room and attempted to make love to him.

In the evening, Okoye served me with bread, butter and tea in my room. Around 3.30am, he crept into my room and wanted to sleep with me, but I refused him.
Okoye was a big man so he attempted to overpower me, but I picked up the bread knife that was still left in the room and stabbed him in the neck, but he did not die.

I picked up a flexible iron and bound it round his neck and locked him inside the room.
When it was 6am, I stepped out of the house and gave the key to one woman beside the gate and fled.
Okoye was found murdered in his home two weeks after he was last seen by neighbours. It was learnt that following the discovery, the security guard and the woman whom the suspect handed the key to were arrested by detectives at the State Criminal Investigation Department, Yaba. After three months, detectives were able to locate the suspect in Anambra State.

A police detective said, the security guard told us that he could identify the suspect if he saw him. In the course of investigation, we obtained call logs from Okoye’s phone and we learnt that the suspect had used Okoye’s phone to call his girlfriend in Anambra State shortly after killing Okoye.

We travelled to Anambra State and we were able to locate the suspect who was even wearing the deceased’s clothes.”
The suspect, however, insisted that he was not a killer but a victim of circumstance
.
My father and my brother are dead. I am the only child of my mother. Who will take care of her if I am sent to prison?

I am not a homosexual but I was used. I tried for several months to impregnate my girlfriend but was not successful. I feel they have stolen my virtues.