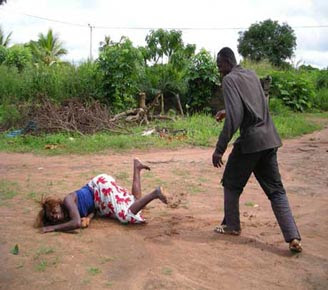 A  30-year-old man in Chugiri in Jos South Local Government Area of Plateau State has confessed that he killed his mother because she was allegedly responsible for his misfortune.

The suspect, Vwang, father of five, living in Chugiri village also accused his mother of using her witchcraft to kill his father, and two of his siblings as well as another woman and her child in the village.

Vwang said he and his children had been suffering from ill health due to his mother’s alleged evil activities.

He said it was common knowledge in the village that his mother was a witch and on the fateful day, he had approached her to stop the act but out of annoyance he had hit her on her forehead, resulting in her losing her balance and hitting the back of her head on the floor.

“She spent about a week in the hospital before she finally died,” he said.

The state Commissioner of Police, Chris Olakpe, who paraded Vwang and 16 other suspects arrested for various offences, explained that the suspect who was a secondary school drop-out had gone to look for menial job but because he was unable to get any, blamed his mother for his misfortune and beat her to death.

Other suspects paraded included a psychology student of a university, who was an alleged accomplice to a soldier who allegedly went to a house at the state low-cost housing estate in Jos to rob but was apprehended.