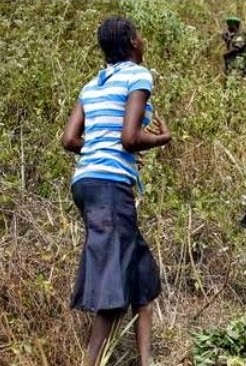 Sept 18, 2014 – Nigerian Man Arrested For Selling Wife To Ritual Killers Looking For Virgin To Use As Human Sacrifice In Plateau State

Nemesis has caught up with a wicked man who recently sold his wife to ritual killers in Plateau state Nigeria.

According to a statement released by Plateau Police Command today, the suspect sold his wife for 800,000 to voodoo practitioners looking for virgin to use as human sacrifice.

The man who hailed from Kwalla allegedly lied to the ritual killers that his wife was a virgin and when the ritualists found out she was the man’s wife, they released her.

“The man lured his wife to a bush under the pretext of fetching firewood and sold her to two ritualists for 800,000 naira (about $5,000),

“When the ritualists discovered that the woman was the man’s wife, they asked her to go because she could not be used for the sacrifice,” . The suspects are in our custody and will be taken to court for criminal conspiracy and an attempted murder,”.

The man identified as Maimako Shephang and his partners in crime have been arrested after the woman reported them to the police.

Lord have mercy!! who else can one trust, imagine a man selling his own wife.