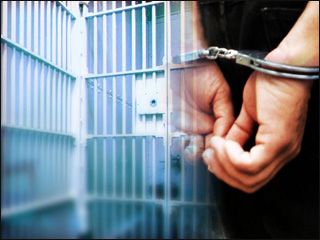 A one of kind sentencing happened on Monday at an Ikeja High Court in Lagos State.

Olaolu Salau, a popular yahoo boy has been sentenced to 168 years in jail with hard labour for allegedly defrauding a businessman, Solomon Ayoola of N2.5 million.

Below is a detail report from Sahara reporter

Judge Adeniyi Onigbanjo gave the verdict following a plea bargain between the convict and the Economic and Crimes Commission (EFCC). Under the terms of the bargain, Mr. Salau pleaded guilty to an amended 24-count charge.

In sentencing him, the judge ordered that the convict serve seven years for each of the 24-counts at Kirikiri Prisons, Lagos.

Justice Onigbanjo however ordered that the sentence run concurrently starting from December 11, 2007, the date Mr. Salau was arrested by the EFCC.

In addition to the jail sentence, the convict was also ordered to pay restitution of N2.5 million to his victim. The judge ruled that he must pay the cash within a year of his release from prison.

The court also approved a plan by prosecutors to use Mr. Salau as a prosecution witness against the remaining defendants.

Mr. Salau was originally arraigned with four others on allegations of conspiracy and defrauding Mr. Ayoola at different times to the tune of N2.5 million. The alleged fraudsters reportedly told Mr. Ayoola that they could increase his money by invoking an invisible entity.

According to the charges, dated May 6 and filed on May 7, 2013 by the EFCC, the convict was charged with conspiring with four others with intent to defraud the businessman of various sums between June and November 2006. The offence contravened section 419 of advanced fee fraud and miscellaneous offences. Mr. Ayoola had written a complaint to the EFCC in September 2007.

Prosecutors disclosed that EFCC investigators established that the fraudsters had obtained the sum of N2.5 million between June and November 2006. The findings led to a 24-count charge, one on conspiracy and 23 others bordering on advanced fee fraud and obtaining money by false pretence.

The case was originally handled by Justice Habeeb Abiru. In the course of trial, Mr. Salau, who had been in custody for seven years, wrote to the EFCC to request a plea bargain.

The other three defendants, Akinsowon Olufemi, Adebisi Adewale, and Muyiwa Ayeni have been remanded in Kirikiri Prison until July 22 when their trial is due to resume.

Can you imagine this ridiculous sentence.

What was done to police pension thief who stole billions of Naira.

Wonders never end in this country.