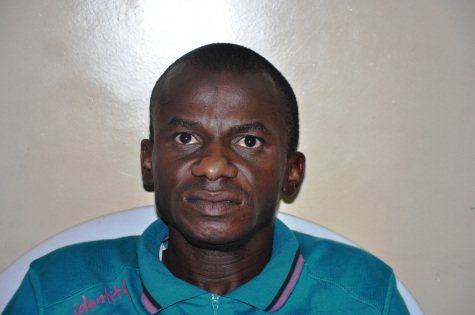 The Economic and Financial Crimes Commission, EFCC, today June 3, 2013, arraigned one Abdullahi Ishaq, a former staff of the Commission before Justice Salisu Garba of the Federal Capital Territory High Court, Abuja on a 2-count charge bordering on professional misconduct, corrupt practices and false declaration of assets.

The accused, a former Detective Inspector with the EFCC attached to the office of the Head of Operations, Abuja, is alleged to have used his position to fraudulently receive a Toyota Camry car as gratification from Dr Shuabu Teidi, a former Director of Pension Accounts, Office of the Head of Civil Service of the Federation, who is presently being prosecuted by the Commission over a N4.5 Billion pension scam. Ishaq also failed to disclosure in his Asset Declaration, a house be built in Yarlemo Naibawa area of Kano State, thereby committing an offence contrary to Section 27(3)(a)of the Economic and Financial Crimes Commission Act 2004 and punishable under Section 27(3) of the same Act.

One of the counts read, “That you Abdullahi Ishaq being an operative of the Economic and Financial Crimes Commission (EFCC) attached to the office of the Head of Operations, Abuja on or about the 4th of November, 2010 at Abuja, within the Abuja Judicial Division of the High Court of the Federal Capital Territory being a public officer used your position in the office of the Head of Operations, to receive a Toyota Camry car with registration No. BG 260 MKA from Dr. Shuaibu Teidi as gratification for yourself and thereby committed an offence punishable under section 19 of the ICPC Act, 2000”.

The accused pleaded not guilty when the charge was read to him.

Ishaq’s tango with the law, started when Dr. Shuaibu Sani alleged that some persons collected money from him with a promise to help him out of the case he had with the Commission. A forensic analysis conducted on Dr. Shuaibu Sani’s telephone number revealed that Ishaq had exchanged text messages with him and solicited for financial and other materials assistance. Ishaq later admitted that he received N380, 000 from Dr. Shuaibu. Further investigation revealed that Ishaq gave his wife’s international passport to Dr. Shuaibu, requesting for Hajj sponsorship although the request was not granted.