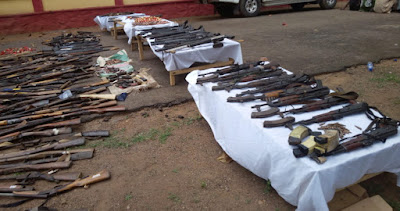 Ogun State Police Command has recovered 1,179 arms and 2,266 ammunitions during its mop up of unlawful weapons in the hands of criminal elements across the state.

The Command, however, added that one person had willingly surrendered his Pump Action riffle to it in Ogun State in compliance with the directive of the Inspector – General of Police on return of illegal arms possession by private individuals.

The Commissioner of Police, Ahmed Iliyasu, made this known at the Command’s Headquarters, Eleweran – Abeokuta, on Thursday, while displaying the arms and ammunitions before journalists.

Iliyasu listed 24 AK 47 assault riffles, 66 Pump Action guns, 1,088 single and double barrel guns, 1,025 rounds of 7.25mm ammunitions and 1,241 cartridges as the number of illegal arms and ammunitions recovered from criminals in the last couple of most months.

Asked why just a single individual in the state yielded to the Police Inspector – General’s directive to return illegal arms to the Command at the expiration of the 21 days ultimatum, the Commissioner of Police said others are “apprehensive,” explaining probably that informed why they are dilly – dallying to returns theirs.

He also paraded 27 crime suspects, including seven robbery suspects, cultists, kidnappers, fraudsters and car snatching syndicates who were arrested at different times and locations for various crimes committed in the state.

According to him, the Command remained committed to securing lives and properties as well as riding the state of criminals.