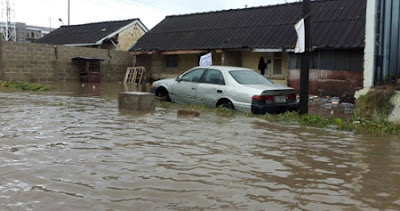 The lifeless bodies of two High School students who drowned in the flood after a heavy rainfall today in Alagbado area of Lagos have been retrieved and taken to the mortuary.

Here is what a witness told the NAN this afternoon:

“We discovered the bodies of the boys while taking shelter and quickly the okada (motorcycle riders) people rushed and lifted them on their shoulders but they were lifeless because their legs and hands were just dangling. I wonder why they should go to school today which was declared work free and see how they have ended their lives just like that; it’s painful”.

Parents of the boys were seen rolling on the floor and wailing at the hospital their lifeless bodies were taken to.

Another witness said may be the boys didn’t know today is a public holiday.

“They were returning from school when a flash flood washed them way” – said another witness close to the relatives of the boys.