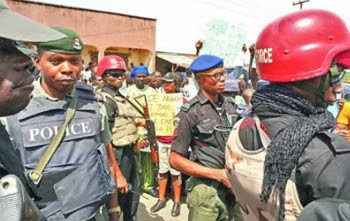 Not less than 6 people died today in a fresh attack carried out by suspected Fulani herdsmen at two separate locations in Kaduna state around 10am and 11am.

A witness said about 10 gunmen wearing army and mobile police uniforms stormed a mining site Bakin Kogi and opened fire on the workers, killing 3 on the spot and injuring 2 others.

In the second attack, the same set of gunmen stormed Kaninkon Chiefom in Jama’a LGA of Kaduna state and opened fire on villagers cutting wood for the roofing of their houses, killing 3 and injuring 2 others.

4 injured victims of the attack are currently receiving treatment at Kafanchan General Hospital.

Continue Reading
You may also like...
Related Topics:attack, Fulani, Kaduna