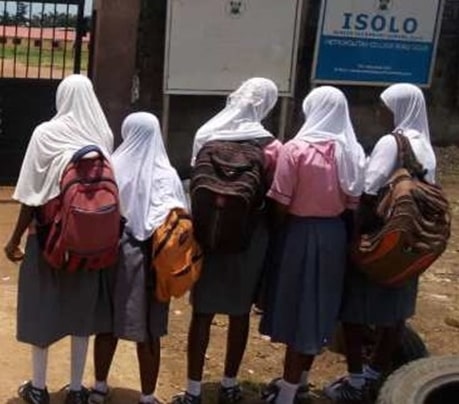 5 students of the Isolo Senior Secondary school have been suspended for going against the rule of the institution.

According to sources, the school’s Principal, Mrs Jameela Sadare announced last week Friday that students should stop wearing Hijab or any other religious outfits to school

However, some Muslim students stormed the institution in Hijab on Tuesday.

They were rounded up on the assembly and sent home to come with their parents.

When the parents came back to the school with their children on Wednesday, they were walked out of the Principal office for insisting their daughters must wear Hijab.

The President of the Muslim Students society of Nigeria has called for reinstatement of the students.

According to Ashafa Saheed, ban of Hijab is an infringement of their religious rights.

What makes the story more interesting is the fact that the Principal who set the rule is also a practicing Muslim. #lobatan