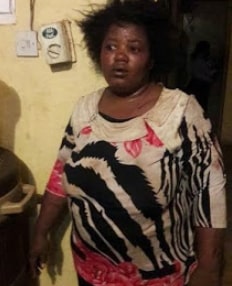 A woman identified as Safiya Idris has been caught by the Niger state Police for kidnapping a three year old child of her neighbor for N5, 000.

The 25-year-old mother of four who is working for a handful was convinced to kidnap the child in order for her to get money to start a business.

The suspect was given N5,000 as her transportation to cross the child from Pandogari in Rafi Local Government Area of Niger state to Kastina state.

The suspected kidnapper was arrested by the police detectives attached to Kagara Division before she could take the child across to Kastina state.

When paraded by the Police, Safiya blamed her father for making her go into kidnapping adding that the inability of the father to train her properly led her into the crime world.

“My father did not consider it necessary to train me to be responsible, otherwise why should I involve myself in this wicked act. Why should I even kidnap my neighbor’s child who always play with my own children, it is unfortunate.

“I do not think that Allah and my neighbours will forgive me for what I did to this little girl, in fact, I do not deserve to be alive to face all this shame.”

The Command’s Public Relations Officer, Muhammad Abubakar said that the suspect confessed that some kidnappers gave her N5 000 to kidnap the child and bring it to them in Kastina.

He said that the victim had been released to her parents adding that the police are on the trail of the other fleeing members of the gang.