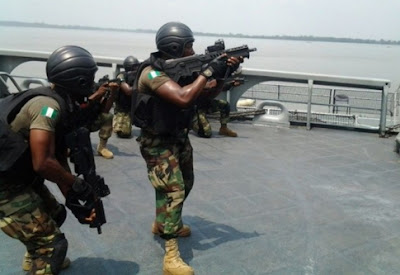 The Nigerian Navy Ship (NNS) BEECROFT on Wednesday in Lagos said it had arrested an impersonator and 11 suspects for allegedly attempting to stow away in a vessel to Europe.

The Commanding Officer NNS BEECROFT, Commodore Abraham Adaji, made the disclosure when he addressed journalists at Apapa, Lagos.

“Preliminary investigations revealed that the arrested persons boarded the vessel, CITRON, through the rudder trunk access manhole in a bid to travel with the vessel to Europe,” Adaji said.

“The suspects were arrested at about 12:30 a.m. on March 11 for illegally boarding Merchant Vessel CITRON berthed at Capital Oil Jetty, Apapa, Lagos.
“They were detected and subsequently arrested by our patrol boat,” Adaji said.
NAN reports that Adaji handed over the suspects to the Nigeria Immigration Service for further investigation and prosecution.

He also said that the Chief of the Naval Staff, Vice-Adm. Ikot Ibas, had zero tolerance for all maritime crimes in Nigeria’s waters.
He called on criminally-minded Nigerians and other nationals to seek legitimate employment instead of engaging themselves in illegal activities.

One of the stowaways, Olu said he was not happy with his standard of living which prompted him to attempt to enter Europe illegally.
Another stowaway, Cooper, blamed frustration for his attempt to travel abroad through illegal means.

A representative of the NIS, Mr Lekan Olagunju, a Chief Superintendent, received the stowaways from the Navy.
He said that investigations would continue with a view to ascertaining the claims of their nationalities before they could be prosecuted.