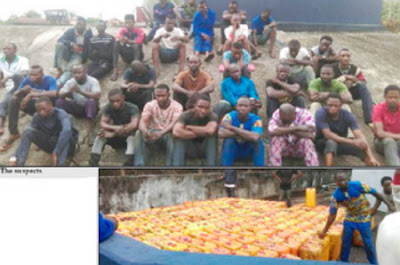 They were arrested on April 19, on Igbokoda-Okitipupa Road by operatives of the Forward Operations Base (FOB) in Igbokoda.

It was gathered that the suspects and exhibits, including 13 vehicles and 31 mobile phones, were handed over to the Okitipupa Area Command of the police on April 20.

The suspects were said to have been intercepted between 10:30pm and 3am while were moving in convoy

FOB Commanding Officer Navy Captain S.T Lengaya said: “In the course of searching the vehicles, some were discovered to have carried illegally refined AGO (diesel) in 30-litre Jerry cans, while others were with empty kegs.

“Further investigationa revealed that the products were brought from creeks by boat and loaded at Ugbonla Jetty. The vehicles with empty kegs were heading to the same jetty to load. 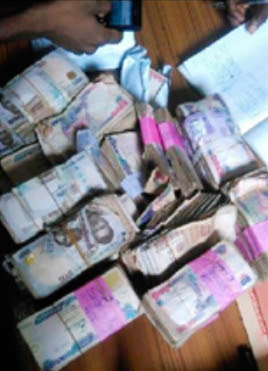 “Subsequent attempt made to arrest those at the jetty was unsuccessful as it was deserted at the time the patrol team arrived.

“Preliminary investigation revealed that the products lacked necessary documentation relating to their source and relevant approvals. “Physical examination also showed the products were illegally refined AGO. In addition, facts on the ground showed the suspects were not licenced to deal in petroleum products.

“Consequently, the suspects comprising 30 men and two women were arrested. The following items were seized 11,100 litres of suspected illegally refined AGO; 1,139 empty 30-litre kegs; 13 vehicles of various models including two buses filled with illegally refined AGO, 31 mobile phones and a cash sum of N3,199,000. They were handed over to the police for further action.”