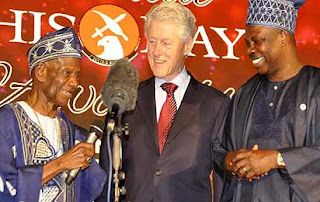 NaijaGists sources in Lagos have revealed that the huge amount of money paid to Ex-US President Bill Clinton to speak in Lagos last year was paid by Nigerian Newspaper This Day.

Just to speak at an event in Lagos, southwest Nigeria, a Nigerian company paid the former American President, Bill Clinton, $700,000 (over N100 million), the New York Times disclosed on Thursday.

The New York Times did not disclose the name of the company which handed Clinton the huge sum of money but sources in Lagos disclosed the huge amount of money was paid by This Day newspaper.

Clinton, since he left office, has visited Nigeria many times, the last two being a guest speaker at the launch of Eko Atlantic City and Thisday Awards.

America’s influential newspaper did not also disclose when the money was paid but said Bill Clinton made $17 million (N2.5 billion) from speeches last year alone.

The disclosure was made as the newspaper revealed also that Hillary Clinton will be paid $200,000 to offer pithy reflections and Mitch Albom-style lessons from her time as the nation’s top diplomat.

“The $200,000 she commands appears to be comparable to what Bill Clinton receives for speeches delivered in this country, though Mr. Clinton — who earned $17 million from speeches last year — has collected much more outside the United States, including the $700,000 he was paid when he spoke to a company in Lagos, Nigeria,” The New York Times said.

Some of the businessmen who had invited Bill Clinton to Nigeria include Nduka Obaigbena, publisher of ThisDay newspaper whose workers protested in May 2013 for being owed months of unpaid salaries.

As for Hillary Clinton, the newspaper said next month, Mrs. Clinton will speak at a meeting of the Global Business Travel Association in San Diego (a convention her husband addressed for $250,000 last June), and in the fall she will deliver speeches at the conference of the American Society of Travel Agents in Miami.

Nigeria is Africa’s second richest country, but the National Bureau of Statistics, NBS, said last year that 100 million out about 160 million Nigerians live in abject poverty.