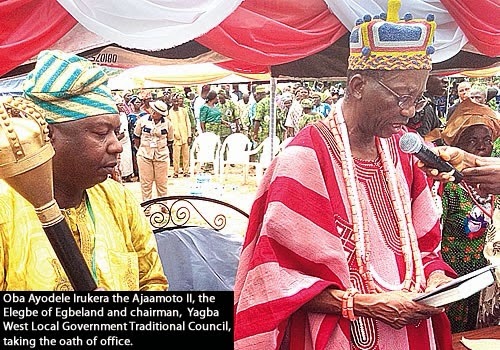 HE is a man of destiny. The road for him to the top was laced with thorns, disappointments, fear of unknown, and road blocks. But with determination, mother luck, and the instinct to survive he surmounted all these obstacles.

For Oba Ayodele Irukera Ajaamoto II, the Elegbe of Egbe Land and chairman, Yagba West Local Government Traditional Council of Kogi State, though a prince, becoming an oba was never in his agenda as he just wanted to survive.

He was a newspaper vendor selling newspapers by the roadside, a building site labourer, a typist among others. These were just steps to climb to the top as he never allowed these to deter him.

However, he studied privately for both General Certificate of Education (O level) and later A level. He passed both in flying colours and it qualified him for admission to Ahmadu Bello University Zaria. After the completion of his astudies, he worked in several places including University of Ilorin Kwara State where he rose to the position of deputy registrar until his voluntary retirement. However, his road to the throne started with his appointment as the Baale of Egbe on September 2012 until his final selection as Elegbe of Egbeland in July 28, 2014.

At his installation and presentation of staff of office recently by the governor, Captain Idris Wada, dignitaries from all walks of life were present to give him their support. Traditional rulers both within and outside the state were equally there to added colour to the event. Oba Ayodele Irukera, at the occasion, promised to pursue the issues of peace and unity as well as promoting peaceful co-existence of communities within his domain.

The State Governor, Capt Idris Wada, at the occasion emphasized the need for robust collaborative efforts between the traditional rulers and the government in the maintenance of peace and security.

The governor who was represented by his Deputy, Yomi Awoniyi, said the need for collaboration had become pertinent in view of the present security challenges in the country.

He urged royal fathers to step up their efforts in assisting to make Kogi State inhabitable for men of the underworld, describing traditional rulers as symbols of collective pride, culture and history of the people.