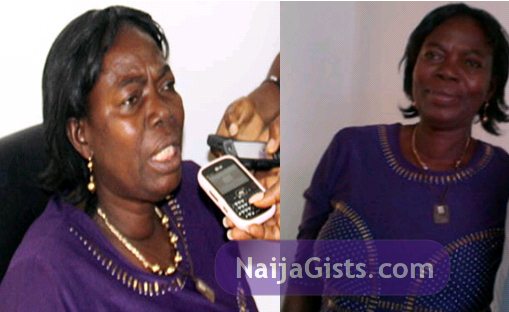 Mrs. Georgina Ahamefule, is an indigene of Imo State who tested positive to HIV while working as an auxiliary nurse at a certain Medical Centre in Lagos. At first, due to her naivety, she found the whole world crashing on her, no thanks to her employer, Dr Molokwu, the Chief Medical Director of the Medical Centre who terminated her employment which began in 1989 and advised her to go back to her village and die since she had only a little time to live.

A lot happened to this woman, as she shares her traumatic experiences during a tumultuous journey to victory. The high point of her account is that her fighting spirit is backed by God and the Social and Economic Rights Action Center (SERAC).

She won a N7-million lawsuit against Dr Molokwu. It was a landmark judgment for Dr. Felix Morka, the executive Director of SERAC who described the judge’s decision as representing a major victory for Georgina and all those living with the HIV virus in the country.

Back to Mrs. Georgina’s story:
While at the village, I ran into someone who asked me to go to LUTH so that I would receive help. I also obeyed.

It was while I visited LUTH that I ran into my god-mother, Mrs Onyewuenyi who listened to my ordeal and referred me to SERAC. When I visited SERAC, they interviewed me and subsequently, contacted my former employer so as to see if he will do any form of settlement but he ignored SERAC, so, SERAC took the matter to court on my behalf.

The first shocker I got was right in the court. Unfortunately, the unfairness I suffered did not stop at the hands of my employer and his hospital. On July 14, 2000, SERAC filed the lawsuit challenging the termination of my employment as an auxiliary nurse by the Medical Centre and its Chief Medical Director, based on my HIV-positive status.

So, the shocker like I mentioned, happened in 2001. Right there in the court, the then presiding judge in the case, barred me from entering the courtroom because of my HIV -positive status.

The judge further ruled that satisfactory expert evidence must be presented in court to convince her that the judge and others would not become infected with the HIV virus as a result of my mere physical presence in the courtroom. It was a huge blow on my devastated life.

SERAC appealed that decision and the Court of Appeal remitted the matter back to the High Court for trial. Thank God I was allowed to testify in my case without further restrictions in the court, in the compound, and because I made public my status which I am glad I did. Otherwise, I would have died out of ignorance.

Some illiterate and ignorant neighbours avoided me like plague. It would have been okay by me if they did just that, but they went further to humiliate me and pass silly comments when they see me around and in short, they looked for one excuse or the other to tell me the story of my life. They fought my niece who came on holiday, saying she had no mother which was why she can put up with me in my state.

In all this, I am grateful to God for the wonderful husband He gave me. My husband has since then tested negative to the virus and you may be glad to know that I also have a son who is also negative. God has really used Dr Felix Morka and in fact, workers at SERAC who have adopted me as a part of their family, to bless me and give me reason to live. Indeed, they gave me reason to live to see my dream of being victorious come true.

I have been getting assistance from SERAC in terms of feeding, transportation to Lagos each time my case came up because I relocated with my family to Obigbo in Rivers State; they also helped for hospital bills.

On the issue of court case, there was another shocker. As my case progressed, my employer presented false affidavit showing that I had died in my hometown. As you can see, I’m alive and very healthy. So, we discovered that the affidavit was filed in support of a motion seeking to dismiss my lawsuit against my employer and his hospital. The false declaration was one of my employer’s and his lawyers’ strategies to frustrate my determination to get justice in the matter of the wrongful termination of my employment and other violations.

On getting information about their wicked plan, Dr Felix Morka called me and asked if I was okay to travel to Lagos, I said yes and he asked me to take the next flight to Lagos which I did. When I appeared at the court, my employer and his cohorts were shocked.

Well, to cut the long story short, on Thursday September 27, 2012, Honorable Justice Y.O. Idowu the judge at the Lagos State High Court Idowu held that the termination of my employment by the hospital where I worked on the ground of my HIV-positive status is illegal, unlawful and actuated by malice and extreme bad faith.

So she gave an order for 5 Million Naira for general damages for the wrongful termination of my employment to be paid to me and 2 Million Naira as compensation for unlawful conduct of HIV testing without my informed consent and also for negligence.

Right now, I feel on top of the world for my victory and in fact that is an understatement because I can’t explain exactly how I feel now. This is a case that seemed impossible and in fact if the matter was left for me or my family to handle, it would have died a natural death because I’m from a poor background.

I appreciate every effort made by Dr Felix Morka (of SERAC) and his workers to see me through this victory without collecting a kobo from me. God will bless them. Now I will have enough to sponsor my son who will be in the university next year. I can also start a good business of my choice or better still, as part of my own contribution, organize a small group that will help other people living with HIV in my community. (Culled from Vanguard)