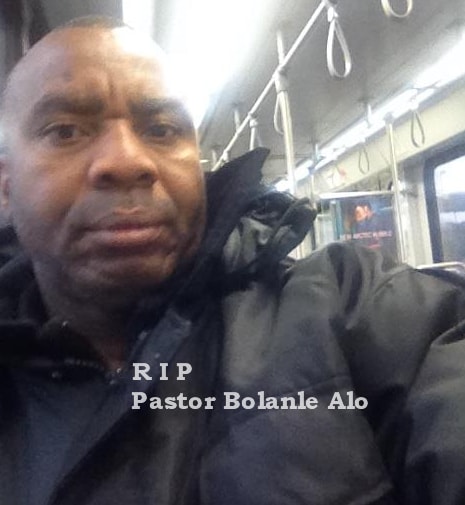 The wife of a Nigerian Pastor who passed away while two immigration police officers were trying to enforce his deportation last week has asked the Canadian government for details surrounding her husband’s death.

Pastor Bolanle Idowu Alo passed away on the 7th of August shortly after he had a fierce altercation with two Calgary Airport policemen who confronted him when he refused to take off on a KLM flight heading for Amsterdam.

The plane was forced to make emergency landing when 49-year-old Alo started causing a scene.

He was later taken to the Canada Border Service section of Calgary Airport where the confrontation continued.

Other reinforcement officers called to the scene found Alo in a serious medical distress and rushed him to an hospital where he was pronounced dead around 4:30pm.

Alo who had earlier cooperated with the Canada Border Services Agency later refused to be returned to Nigeria before enforcement officers confronted him.

The deceased who arrived Canada in 2005 was rejected after making a refugee claim.

He was ordered removed from Canada in February 2018 but he insisted that he will face harm if returned to Nigeria.

He had on several occasions said that his dead body will be returned to Nigeria, a threat that later came to pass.

His heartbroken widow who is based in Lagos is asking Canada for circumstances that led to her husband’s untimely death in a country she believed will protect him from the fear of death and harm that chased him away from his country of birth.

His corpse is yet to be removed from Canada as investigation is still ongoing.

The deceased was a Pastor in Nigeria before he relocated to Canada.