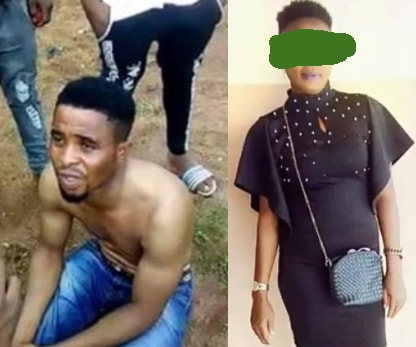 Video: Nigerian Pastor Who Impregnated Married Church Member In Benin & Forced Her To Have Abortion Arrested After Woman Dies

Meet Pastor EIV, a  Benin-based Pastor who allegedly separated from his legal wife in May 2018 after a series of domestic violence.

The young Pastor from Agbor Delta state was humiliated few days ago in Egor LGA of Edo state days after one of his church members died following a botched abortion procedure.

According to sources, EIV who left his wife 3 months ago moved into the house of his married church member whose husband is based in the United States.

After she became pregnant, rumour has it that the self acclaimed Pastor talked her into having an abortion, sadly she agreed to his demand and aborted the baby.

Shortly after the death of the woman, her family members invaded the house where the Pastor was hiding in Okhokhugbo area of Egor, dragged him out of the house and humiliated  him.

How can a genuine Pastor stay in the house of a woman he is not married to???…. Yahoo Pastors on rampage.. Ladies beware.!!!