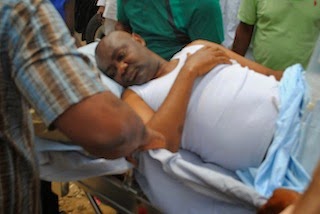 Senator Magnus Abe is currently in coma at a private hospital in Rivers state after some trigger-happy police officers shot him on the chest and leg twice during a rally.

The doctors said the Senator is yet to utter a word following the police brutality.

According to witnesses, Abe, who is the Chairman of the Senate Committee on Petroleum (Down Stream) was attacked at the Rivers State College of Arts and Science, venue of the rally organised by Save Rivers Movement, SRM, a group loyal believed be loyal to the Rivers State Governor, Hon. Rotimi Amaechi.

Magnus Abe, the former Secretary to the State Government, was said to have gone to the. College of Arts and Science off, Rumuola road,Port Harcourt, see to final arrangements for the rally which was another in a series of others billed for the 23 local Government areas of the state.

The Men of the Rivers Police Command had arrived the venue as early as 7 a.m and taken strategic positions around the rally venue and blocked the ever busy dualized Rumuola road refusing access to the venue.

The Senator was said to have been hit twice in the chest and leg by some rubber bullets fired by some trigger-happy police men, who confronted the lawmaker as he was about to enter the venue of the rally.

The Chief of Staff to the Rivers State Governor, Tony Okocha was said to have been lucky to escape by the whiskers.One report said he was shot in the leg.

The Senator was rushed immediately to a private hospital, Krisany Medical Services, located at the Agudama area of Port Harcourt, where he was attended to by a team of medical personnel, headed by Dr. Mackay Anyanwu.

Dr. Anyanwu, who spoke on the Senator’s state, explained that the Senator was suffering from severe blood shock.

Dr. Mackay explains; ‘’The patient( Abe) was brought in a state of a shock, as evidenced by low blood pressure. He was restless and he couldn’t communicate or reason coherently.’’

‘’ As a first aid, we treated him for traumatic shock, because the implication of his state was that there was severe blood trauma and the amount of layers affected could not be detected immediately. This can only be done through the hemorrhoid tests.’’

Dr Anyanwu continues; ‘’We have administered Oxygen treatment on him for resuscitation and primary medication, but we also detected severe internal bleeding and high level haemorrhaging in him. Another bad news is that we also detected that the affected side is showing severe swelling, which led me to the conclusion that he must have been hit by a high caliber weapon and my fears were confirmed when I was told that he was shot with a rubber bullet.’

Another sad case of police brutality.