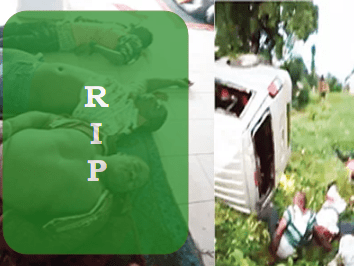 NPF on Friday released the identities of the three policemen murdered by soldiers in Taraba State on Wednesday.

The FPRO said the deceased policemen were part of officers who arrested the billionaire kidnapper, Chukwudi Dumeme Onuamadike aka Evans.

“The gallant, outstanding IRT team attacked by soldiers in Taraba State consists of some of the most disciplined, proficient and hardworking police investigators in the service of the nation.

“Until their untimely death in the hands of soldiers of 93 Battalion Takum in Taraba State, these officers have participated in several high profile and high risk arrests, rescue missions and investigative operations.”

The FPRO listed some of the operations to include the arrest of Nigeria’s most notorious kidnap kingpin, Evans. The arrest of 22 Boko Haram terrorists responsible for the 2014 kidnapping of the Chibok schoolgirls in Borno State; the arrest of Umar Abdulmalik, the overall Boko Haram Commander of North-Central and several of his group members; the arrest of the kidnappers of two American and two Canadian citizens in Kaduna State.

He said the Inspector-General of Police (IG), Mr. Mohammed Adamu, had commiserated with the families, friends and professional colleagues of the fallen heroes, reassuring them that their death would not be in vain.

The IG equally called for calm, assuring that efforts were in top gear to unravel the mystery surrounding this bizarre crime.

But the killing of the policemen has generated ripples between the Force Headquarters and the Nigerian Army.

The police hierarchy yesterday accused the Army of distorting facts.

The Force Headquarters alleged that three operatives attached to the IGP Intelligence Response Team (IRT), and a civilian, shot and killed by soldiers during an investigation operation that led to the arrest of a suspected kidnap kingpin, Alhaji Hamisu Wadume, within the Ibi general area.

Mba, who levelled the allegation, said after killing the policemen, and leaving others with varying degrees of injuries, the kidnap-suspect, who was being taken to the Taraba State Police Command in Jalingo, had his handcuffs unlocked by the soldiers, and subsequently set free.

Mba noted that the killing of the special forces members on Ibi-Jalingo Road, occurred in the face of “sufficient proof” that they were law enforcement officers on legitimate duty.

One of such cases, according to the police, was the recent abduction of an oil mogul in Taraba State, wherein a ransom of about N100 million was said to have been paid.

Consequently, IG Adamu had ordered a full-scale investigation into the tragic incident, even as he directed the AIG medicals to proceed to Jalingo, the Taraba State capital, to ensure concerted efforts in the treatment of the injured police officers.

In response to the claim by the police, the Army had described the operative as “suspected kidnappers”, who had allegedly refused to identify themselves when asked to do so.

The Acting Director of Army Public Relations, Col. Sagir Musa, in a reaction Wednesday night, had said the incident was triggered by a “distressed call to rescue a kidnapped victim”.

“The suspected kidnappers numbering about 10 and driving in a white bus with registration number LAGOS MUS 564 EU refused to stop when they were halted by troops at three consecutive checkpoints.

He claimed that it was after the fatal incident that “one of the wounded suspects” (a policeman) disclosed that they were law enforcement officers from the Force Headquarters, Abuja.

Musa said the shooting could have been avoided if “proper coordination and liaison” had been employed.

However, the police have taken strong exceptions to the Army’s position, describing it as “insensitive, disrespectful and unpatriotic,” to say the least.

Mba said in a statement yesterday that the police would ordinarily have remained silent in the interest of esprit de corps, inter-agency harmony and national interest, but for perceived attempts by the Army to distort facts.

While asking the Army to come clean on the fatal attack, the police further challenged it to tell the public where the arrested but freed kidnap suspect is.

This was as the police further dared the Army to reveal the source of the “distress call” and identity, at least to set the records straight.

“The attention of the Nigeria Police Force has been drawn to the press release by the Nigerian Army dated 07 August, 2019, seeking to justify the unprovoked and unwarranted murder of three police officers and one civilian, and serious injury to other operatives, who were on legitimate criminal investigation activities to Taraba State, to arrest one Alhaji Hamisu Bala Wadume indicted in a series of high-profile kidnap incidents in the state.

“In the best tradition of esprit de corps, inter-agency harmony and national interest, the Nigeria Police Force would naturally have kept quiet, but it has become imperative to set the record straight by addressing the obvious distortion of facts inherent in the press release by the Nigerian Army,” Mba said.

The FPRO urged the Army to provide the suspected kidnap kingpin who the soldiers set free.

“Second, the press release was silent on the source of the alleged distress report or identity of the complainant, on the strength of whose report, the Army claimed had informed their decision to engage in the purported chase and rescue operation.

“Needless to state that in the true spirit of transparency and accountability, the Nigerian Army ought to have arrested the purported distress caller – if any – for obviously and deliberately furnishing them with false and misleading information. Besides, such arrest should in fact be made public.”

Meanwhile, the police have put a lie to the Army’s claim that there was no material evidence to indicate that the IRT operatives were law enforcement officers.

To buttress the position, the police said the operatives had, upon executing the operation, undertaken proper documentation at the Taraba State Police Command Headquarters, as well as at the Wukari Area Command.

Above all, the policemen had done the needful at the Ibi Divisional Headquarters, thereby fulfilling conditions precedent for any external operation.

“It is not true that the policemen failed to identify themselves as alleged in the press release. The video on the incident, now viral, wherein the voice of one of the soldiers was heard loudly proclaiming that the policemen were from the Force Headquarters, Abuja speaks volume.

“Besides, the presence of the IRT personnel was well known to the Taraba Police Command as the operatives officially and properly documented not only at the state Command Headquarters but also at the Wukari Area Command and the Ibi Divisional Headquarters.

“As a matter of fact, some of the detectives from the Taraba State Command’s Criminal Investigations and Intelligent Department (SCIID) were part of the operation.

“The Force also considers it insensitive, disrespectful and unpatriotic for the press release by the Army to continue to describe policemen on lawful national assignment as ‘suspected kidnappers’ long after it had become crystal clear to the Army that these are law enforcement officers who unfortunately were gruesomely murdered in the line of duty by Nigerian soldiers attached to 93 Battalion, Takum.

“If Alhaji Hamisu Bala Wadume is a ‘victim of kidnap’ as claimed, and properly rescued by soldiers, why was he not taken to the Army Base for documentation purposes and debriefing in line with the Standard Operating Procedure in the Nigerian Army?

“Why were the police operatives shot at close range even after they had identified themselves as police officers on legitimate duty as evident in the video now in circulation?”