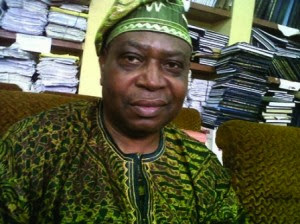 In what appeared to be a planned assassination, details have emerged on the death of former ASUU President, Professor Festus Iyayi who was reported to have died in a fatal car accident involving Kogi Governor convoy few weeks ago.

Dr Anthony Monye Emina, an Associate Professor of Economics and the Chairman of UNIBEN ASUU Chapter who witnessed the accident has opened up to Jethro Ibikele on what transpired on that fateful day.

Interview excerpt below:
Could you please narrate what actually happened?

After taking our meal at Lokoja, we bought some copies of the day’s newspapers. Thereafter, we entered NNPC mega filling station just on the outskirts of Lokoja, refilled our tanks and continued our journey. We noticed that the stretch of road  between that mega station up to the point of the accident was very busy. We were moving in a convoy. UNIBEN vehicle was in the front, followed by DELSU – Delta State University – Abraka and Ambrose Alli University, AAU, Ekpoma. When we left, DELSU was immediately behind us but we were not immediately seeing Ekpoma, so we asked the driver to slow down, considering the busy nature of the road and the fact that Ekpoma was to join us; and so, he slowed down.

We passed the Road Safety checkpoint, and after that one, we passed another Road Safety checkpoint. But not up to 200 metres after the point of the second Road Safety checkpoint, we saw this convoy of Kogi State governor heading in the opposite direction, apparently coming from Abuja and heading to Lokoja. There was no big vehicle in front of us and behind us and there was no threat of overtaking from any direction. Just toward the tail end of the convoy, I noticed that the last escort vehicle, a police pick-up van, veered off their lane and was heading straight at us. So I asked the driver of the vehicle to watch the vehicle. As soon as I told him to watch the vehicle, it kept coming and it looked as if the speed with which it was coming increased, so I asked the driver to leave the road for him. Even before I said so, the driver had started leaving the road.

When the vehicle came to a halt, I turned back, but I didn’t see the other occupants with me. We were actually three, plus the driver, making us four. Two of them were at the back, and I was in the front with the driver. So I tried to open the door. By then, I was already bleeding from the injury on my hand and my legs. I tried to open the door but I couldn’t. My colleagues from DELSU and AAU who had arrived, helped me to open the door. By then, we saw that the other lady, Mrs. Iloh, who is the National Welfare Officer, was hanging on the window. From her waist down, she was outside dangling while the rest of the body was inside the vehicle upside down. And then, Prof was seated in an upright position.

The Road Safety [officers] which we just passed were watching. It was a straight stretch of the road. No curve, no hill, no valley, no pothole on the road there, a level land for that matter. So they came, they were the ones that helped us to pull down Dr. (Mrs.) Iloh whom we thought didn’t make it. But surprisingly, after a few minutes, she opened her eyes and raised her hand and tried to inquire what had happened.

Then we looked at Prof. He was motionless, but sitting in an upside position. So we went closer and we noticed that the left upper arm was shattered and we saw a mass of blood around the chest.

An ambulance in the convoy of the governor came back on noticing the accident, picked the occupants of the police van and wanted to drive off. But with the intervention of my colleagues from DELSU and AAU, they came back and picked Dr. (Mrs.) Iloh while we tried to pull Prof out of the vehicle, hoping that he was unconscious, but before we could do that, the ambulance had left. It was the Road Safety people that helped us to pull him out of the vehicle and carried him to the hospital. And it was at the hospital that they pronounced him dead.

When they took him to the mortuary, it was then we noticed that he had a hole in the chest region, close to the heart, it was massive. But we don’t know what could have caused that injury.

There are insinuations that he was likely shot with a lethal weapon, possibly a shot gun. Did you hear anything like a gunshot?

Well, I wouldn’t be in a position to say because, during the impact I heard the sound when the two vehicles collided. And even with the fact that it was a police vehicle, it is posible that, naturally as we usually notice, those cops in the escort vehicle of governors are always armed. So anything could have happened between the point of impact and so on.

Reports from Lokoja had it that an iron from the seat pierced the Prof from the back to his chest, is that correct?

From your own assessment, would you say the man was murdered?

Well, anything could have happened because, given the circumstances of the accident, the vehicle veered off the road and was coming in our direction. Even when we made effort to leave the way, he kept coming at us. These give cause for suspicion and concern.

What was the reception like at the hospital in Lokoja?

When we got to Lokoja, they first referred us to the Federal Medical Centre. When we got there, I was eager to know his condition, so I followed closely behind him. We got there, and the fellow we met at the point there immediately said they should take him to the mortuary, I was very angry, saying: Why will you ask them to take him to the mortuary? Have you checked to confirm whether he is actually dead? So when he looked at me and noticed that I was in the same vehicle, it was then he apologised and said he would actually come and check him. That was the point at which they moved me away from the scene to attend to my own injuries.

But by the time I came out of the ward, they had left the arrival point at the hospital and I was told that they had  moved him to the state specialist hospital because, according to them, the mortuary at the Federal Medical Centre didn’t have adequate facility to preserve the corpse.

One disturbing aspect of the whole thing is that after the incident – this thing happened between 11:15am and 11:30am on that fateful day – the governor of the state didn’t come the hospital until about 5pm. And then, when they took the other injured colleague, Dr. (Mrs.) Iloh to the state specialist hospital, they told us they didn’t have facilities for X-ray and scanning, that the closest to the hospital was Ilorin. But surprisingly, after the governor’s visit, the facilities came. So, we were disturbed. That was in fact part of the reasons why we were angry.

And apart from his coming late, he came with a team of journalists with cameras to video his visit to the hospital. We felt that this was not proper. That was why we got angry with him.