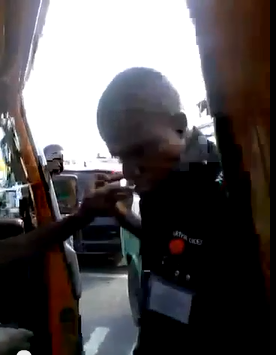 A very rude Nigerian police corporal with Force Identification Number 453255 is about to lose his job after he was caught assaulting a pregnant woman on a bus in Lagos.

The officer identified as Arthur Okeke was caught on video violently assaulting the pregnant woman.

The sister to the Pregnant woman, Busayomi who tweeted the case on Monday said the police offer dragged her heavily pregnant sister out of the bus before beating her up and later tore her clothes.

It happened on Monday at the Bar Beach area of Lagos. Busayomi said her sister has been hospitalized since yesterday.

Arthur was exposed when someone in bus secretly recorded him.

Arthur got really pissed off after the pregnant woman refused him to place his head on her back rest.